Ovid is a village in and one of the two county seats of Seneca County, New York, United States. The population was 602 at the 2010 census. The town was named by a clerk interested in the classics (see Ovid).

The Village of Ovid is within the Town of Ovid, but a small portion is in the Town of Romulus, and is southeast of Geneva, New York.

Ovid and the surrounding area was part the lands controlled by the Iroquois. The Sullivan Expedition of 1779 drove away or killed many of these natives to reduce their raiding in support of the British. After the American Revolution the village was in the Central New York Military Tract, used to compensate soldiers.

Ovid was the first county seat of Seneca County, and a courthouse was erected in 1806. When adjacent towns were created from Ovid and placed in other counties, Ovid was seen as being too far from the county center, and Waterloo became the county seat. Later, Waterloo itself became located on the northern fringe of the county when new towns created there were assigned to new counties. The ultimate solution was to make both Ovid and Waterloo county seats.

The David and Mary Kinne Farmstead, Seneca County Courthouse Complex at Ovid, and Aaron Wilson House are listed on the National Register of Historic Places.

According to the United States Census Bureau, the village has a total area of 0.4 square miles (1.1 km²), none of which is covered with water.

The village is in the Finger Lakes District, lying between Cayuga Lake and Seneca Lake.

Simpson Creek flows through the village to Seneca Lake. 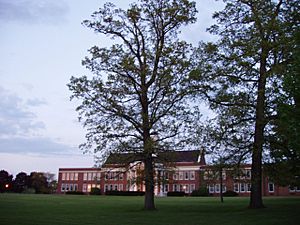 There were 251 households out of which 25.5% had children under the age of 18 living with them, 35.9% were married couples living together, 15.5% had a female householder with no husband present, and 42.2% were non-families. 33.1% of all households were made up of individuals and 15.2% had someone living alone who was 65 years of age or older. The average household size was 2.37 and the average family size was 3.02.

All content from Kiddle encyclopedia articles (including the article images and facts) can be freely used under Attribution-ShareAlike license, unless stated otherwise. Cite this article:
Ovid (village), New York Facts for Kids. Kiddle Encyclopedia.