Formerly Owhango was a mill town, milling native timbers from around the local area. The mill burned to the ground in the 1970s. Many of the mill houses are now holiday homes owned by city dwellers keen on the skiing, fishing, hunting, canoeing and tramping opportunities that abound in the surrounding area. The village has a population of little more than 200 and has a primary school, garage (no fuel sold there, however), hotel, accommodation lodges, cottages for hire and bed and breakfast/homestay places and a cafe and public hall where the market is held once a month.

The village is one of the most picturesque in New Zealand with a backdrop of native forest and Mount Ruapehu. In the spring, the village trees and gardens are alive with native birds, most notably tui and Kererū. A delightful domain set amongst native forest features large open playing fields, children's play area and two tennis courts.

Owhango is located on the 39° latitude line, placing it on the boundary of the old Auckland Province and Wellington Provinces. Half way through Owhango is the sign marking "39° South". This sign is accurate (to within a few metres) when using NZ Geodetic Datum 1949. The position of 39° South when using WGS84 (or NZ Geodetic Datum 2000) is about 196 metres further south. 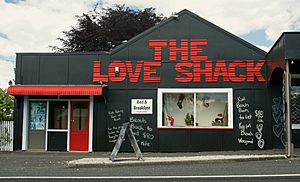 The native forest is part of the Ohinetonga Scenic Reserve which contains unlogged old growth native forest containing some forest giants and a pretty lagoon accessible from a looped walking track. A road through the reserve - signposted from the State Highway - leads down to one of New Zealand's most famous river scenes, the view from the old logging bridge over the Whakapapa River. Along the river are memorable picnic spots with superb swimming pools containing rainbow and brown trout. And also a launch point for Kayakist heading for Kakahi, or even further down the Whanganui River.

Beyond the bridge is the vast expanse of Tongariro Forest, once the source of timber for the local mill, but now protected as conservation land thanks to a successful campaign in the 1980s led by local people to save the forest from clearance . Bisecting the forest is one of New Zealand's best mountain bike rides, the "42 Traverse". The forest also has excellent tramping, camping and deer hunting opportunities. In the heart of the regenerating forest is one of only a handful of national kiwi sanctuaries where the Department of Conservation controls alien predators to protect a population of the North Island Brown Kiwi. 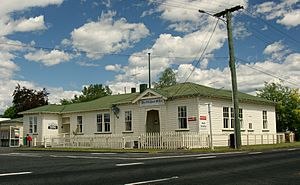 The "Owhango Hall" was originally used as a silent movies cinema [1] seating 250.

Owhango is a Māori name that translates as "the place of wheezy noises".

All content from Kiddle encyclopedia articles (including the article images and facts) can be freely used under Attribution-ShareAlike license, unless stated otherwise. Cite this article:
Owhango Facts for Kids. Kiddle Encyclopedia.