Oxford is a city in Calhoun and Talladega counties in the State of Alabama. The population was 21,348 at the 2010 census, an increase of 46.3% since the 2000 Census. Oxford is one of two principal cities of and included in the Anniston-Oxford Metropolitan Statistical Area.

Oxford lies among the foothills at the southern end of the Blue Ridge Mountains. Nearby Cheaha Mountain is Alabama's highest point and offers expansive views of the surrounding wilderness and the city below. Much of the city's southern border is shared with the Talladega National Forest. 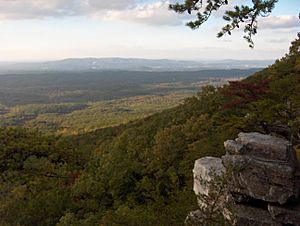 View from Pulpit Rock on Cheaha Mountain. Oxford lies just in front of Coldwater Mountain in the distance.

Founded in the early 1850s, Oxford was the first city in Calhoun County to be incorporated, in 1852. When the town was formed, it was originally named Lick Skillet. The name was later changed to "Oxford" due to the presence of a narrow crossing of Chocolocco Creek that allowed farmers to ford cattle from one side of the creek to the other. Since 1970, Oxford has annexed large amounts of land to the south and west, including the communities of Coldwater and Bynum. In 1970, it was all in Calhoun County, but today it includes areas in Talladega County.

A smaller municipality, Hobson City, was once a part of Oxford. The area, then known as the Mooree Quarter, is one square mile, and is located north and west of Oxford, and south and west of Anniston. In the last years of the 19th century, according to tradition, in the course of political elections, a black man managed to be elected justice of the peace in Oxford. This being unacceptable to the city fathers, they appealed to the powers in the state capital, and an 'arrangement' was made. The city boundaries were redrawn, in similar fashion to a gerrymander, and the quarter was excluded, becoming a town unto itself. The new town became incorporated on August 16, 1899 as Hobson City, taking the name of a naval hero of the Spanish–American War. The intention was that the largely black population of this quarter would no longer skew the elections of the now almost exclusively white Oxford. Another result was the creation of only the second town in the United States (after Eatonville, Florida) with 100% black government, and an almost 100% black population (at least at first).

On April 26, 2016, Oxford unanimously approved a bathroom bill making it illegal to enter the restroom of a person's opposite gender to what is stated on their birth certificate. On May 4, 2016, in a 3-2 vote, the city rescinded it.

Major highways passing through Oxford include:

There were 8,072 households out of which 32.2% had children under the age of 18 living with them, 55.4% are married couples living together, 13.9% had a female householder with no husband present, and 26.2% were non-families. 22.6% of all households were made up of individuals and 9.2% had someone living alone who was 65 years of age or older. The average household size was 2.61 and the average family size was 3.05.

All content from Kiddle encyclopedia articles (including the article images and facts) can be freely used under Attribution-ShareAlike license, unless stated otherwise. Cite this article:
Oxford, Alabama Facts for Kids. Kiddle Encyclopedia.