P. S. Sreedharan Pillai (born 1 December 1954) is an Indian politician, attorney, and author, who is currently serving as the 19th Governor of Goa state. He had also served as the Governor of Mizoram. In addition, he was previously the Bharatiya Janata Party president of Kerala state.

Sreedharan Pillai took to writing nearly four decades ago, publishing his first book in 1983. He has published more than 165+ books. 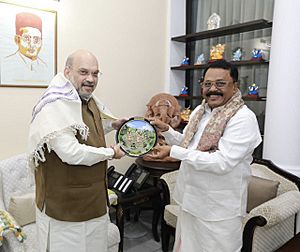 Pillai married Advocate K. Rita at Kozhikode in 1984, who is a practicing lawyer at the District Court Kozhikode. His son Arjun Sreedhar is a lawyer at the High Court of Kerala and started the profession as Junior to his father. His daughter-in-law Jipsa Arjun is a post-graduate in pediatric dentistry and is practicing at Calicut. His daughter Arya Arun is a post-graduate in Dental Science and is practicing in Cochin, while her husband Arun Krishna Dhan is also a lawyer in the High Court of Kerala and started his career as a junior to his father-in-law.

All content from Kiddle encyclopedia articles (including the article images and facts) can be freely used under Attribution-ShareAlike license, unless stated otherwise. Cite this article:
P. S. Sreedharan Pillai Facts for Kids. Kiddle Encyclopedia.