Palenville is a hamlet and census-designated place (CDP) in Greene County, New York, United States. The population was 1,037 at the 2010 census.

Palenville is in the southwestern part of the town of Catskill, located at the junction of Routes 23A and 32A. It lies at the foot of Kaaterskill Clove, at the base of the Catskill Mountains. Kaaterskill Creek, exiting the Clove, runs through the town, and was spanned by a swinging footbridge, destroyed during Tropical Storm Irene. The creek provides a number of swimming holes in the summer months, and the Long Path runs through the town. 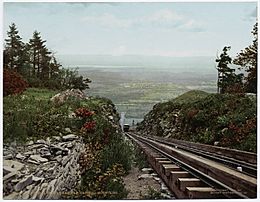 With many waterfalls and natural vistas nearby, Palenville was an important center of the Hudson River School of painting during the 19th century. Thomas Cole, Frederic Church, and other notable painters stayed and worked in Palenville during the height of the movement. The famous painting Kindred Spirits depicts Cole and William Cullen Bryant near Kaaterskill Falls, just uphill from the town. The famous Catskill Mountain House was also located just outside Palenville. Palenville was the fictional home of Rip Van Winkle.

Palenville historically was described as the "First Art Colony in America" Dr. Roland Van Zandt, in The Catskill Mountain House.

With the coming of the twentieth century, the large boarding houses of the mountain top started to close, but Palenville and the surroundings were often visited by city dwellers. Palenville was one of the Catskills' vacation resorts, hosting nearly two dozen small and medium-sized boarding houses and many hotels at the turn of the century. Palenville, Kaaterskill Creek, and Kaaterskill Clove have been subjects for several painters, including those listed above.

Late in the 20th century an art gallery opened on Palenville's Main Street, and the Pine Orchard Summer Festival was founded. Opening in 1980 and hosting its first national juried show in 1981, the privately owned and funded Terrance Gallery exhibited more than 1,200 American artists, in a call to revisit the historic gathering place of the 19th-century painters. The Pine Orchard, located on 60 acres (240,000 m2) along the Manorville Road, through fundraising and grants refurbished a chapel into a theater and hosted opera, plays, musicians, writers and artists. Shakespeare and the Circus arts were presented there by the Bond Street Theater group. 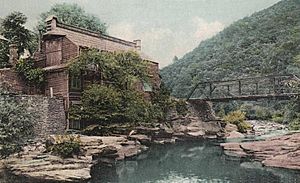 Mary Pickford made several movies in Palenville. Robert Goss of the group "Dripping Goss" (American Gothic Records) had a single that sold well in Europe in the 1990s, some of which were recorded at the Turning Mill Studio in Palenville.

The Terrance Gallery and the Pine Orchard festivals have closed, but the Palenville Library and the Woodbine Inn are still open.

Other noted artists who frequented Palenville and the Clove included Winslow Homer, Asher B. Durand, Thomas Addison Richards, John Frederick Kensett and Sanford R. Gifford. Landscape painters of the 20th century included Albert Handel, Barry Hopkins, Athena Billias, Michelle Moran and Patti Ferrara. George H. Hall, who was a genre painter, took up residence in Palenville towards the end of the 19th century; and Terrance J. DePietro, an abstract painter, who was early on influenced by the Hudson River School, maintained residence and a studio from the latter part of the 20th century into the 21st. He brought artists from Quebec, Canada, including Nicole Lemelin and Remi LaRoche.

There were 433 households, out of which 30.5% had children under the age of 18 living with them, 52.0% were married couples living together, 10.9% had a female householder with no husband present, and 33.5% were non-families. 25.9% of all households were made up of individuals, and 8.3% had someone living alone who was 65 years of age or older. The average household size was 2.45 and the average family size was 2.94.

All content from Kiddle encyclopedia articles (including the article images and facts) can be freely used under Attribution-ShareAlike license, unless stated otherwise. Cite this article:
Palenville, New York Facts for Kids. Kiddle Encyclopedia.