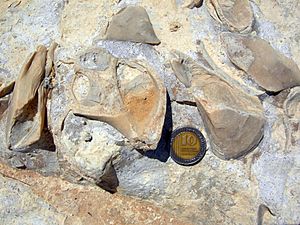 Paleobiology is a branch of science which studies animals, plants and microbes buried in rock. These stoney items are called fossils. Paleobiology combines biology with the study of these fossils. There are several branches of paleobiology:

Baron Franz Nopcsa von Felső-Szilvás started paleobiology in the late 19th century while working at the University of Vienna. He tried to learn how the animals lived, rather than merely put together their bones, as many geologists were doing at the time.

All content from Kiddle encyclopedia articles (including the article images and facts) can be freely used under Attribution-ShareAlike license, unless stated otherwise. Cite this article:
Paleobiology Facts for Kids. Kiddle Encyclopedia.