Papilio aegeus, the orchard swallowtail butterfly or large citrus butterfly is a species of butterfly from the family Papilionidae, that is found in eastern Australia and Papua New Guinea.

The larvae of this species are sometimes considered a pest, due to their feeding on citrus leaves in suburban gardens. 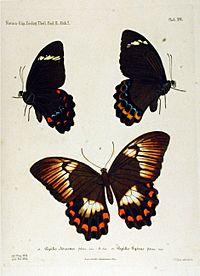 Both male and female have black forewings with a white stripe, though there is more white overall on the female forewing. The hindwing is again black, and there is a white swath through the middle. Here the markings differ in that the female has chains of red to orange and blue crescents toward the edge. The markings on the underside are similar to those on top. The body is black. The wingspan is about 140 millimetres (5.5 in) in females and 120 millimetres (4.7 in) in males, making it rather large overall and the largest butterfly commonly seen in at least part of its range.

Despite being a swallowtail, which group derives its name from the distinctive tails on the hindwing, this characteristic is entirely absent.

Papilio aegeus can be found in every state in Australia except Tasmania. Western Australia has well established colonies in the Albany region. There are enthusiasts who are promoting the controlled propagation of eggs and caterpillars in Western Australia, but it is generally found in eastern Australia. It is especially common in Queensland and is the largest butterfly commonly found in Brisbane where there are many citrus trees, on which the larvae feed. During summer, the distribution is temporarily extended to Victoria.

The subspecies P. a. ormenus is found on Papua New Guinea and Thursday Island.

Other subspecies occur on islands in the Banda Sea and the Bismarck Sea.

The female lays creamy white, smooth, spherical eggs with an approximate diameter of 0.5 millimetres individually on the upper surface of the leaves and shoots of host plants, primarily tropical to subtropical members of the family Rutaceae, which includes introduced and native citrus. The eggs will hatch about one week later.

The early instars are brown with three white patches, one the: thorax, above the first pair of prolegs, and one on 8th and 9th segment of the abdomen. It is lined with black and white tubercles. The larva only feed on their food plants, citrus. Feeding usually takes place during the day and resting on the upperside of leaves during the night, resembling fresh bird droppings.

The later instars are green with irregular white, yellow or brown markings that run diagonally up/back from the bottom edge of the thorax to the 4th and 6th segments. After about four weeks, the larva may have reached a length of 60 millimetres (2.4 in) and be ready to pupate.

The larvae are sometimes parasitised by other parasitic insects. Like other swallowtail butterflies, when disturbed, the caterpillar erects its bright red osmeterium from behind the head, releasing the smell of citrus, to drive predators away.

The pupa is coloured in cryptic grey, green or brown, depending on the colour of the stem it is attached to. The chrysalis is fastened to a stem of the host plant by means of a cremaster. A thin girdle of silk keeps the head end of the chrysalis uppermost during pupation. Depending on the season, an imago will emerge from the chrysalis, approximately one to six months later.

In addition, larvae have also been recorded using introduced species of the following taxa as food plants: Choisya, Citrus, Murraya, Poncirus and Zanthoxylum.

Papilio aegeus is the nominal member of the aegeus species group. The clade members are:

All content from Kiddle encyclopedia articles (including the article images and facts) can be freely used under Attribution-ShareAlike license, unless stated otherwise. Cite this article:
Papilio aegeus Facts for Kids. Kiddle Encyclopedia.