Parkchester is a planned community originally developed by the Metropolitan Life Insurance Company and located in the southeast Bronx, New York City. The neighborhood is part of Bronx Community Board 9. Its boundaries, starting from the north and moving clockwise, are East Tremont Avenue to the north, Castle Hill Avenue to the east, the Cross-Bronx Expressway-Westchester Avenue to the south (Westchester Avenue is the southern border east of Metropolitan Avenue), and White Plains Road to the west. Metropolitan Avenue is the primary thoroughfare through Parkchester. The 6 <6> trains of the New York City Subway operate along Westchester Avenue. The local ZIP code is 10462. The area is patrolled by the NYPD's 43rd Precinct located at 900 Fteley Avenue in Soundview. New York City Housing Authority (NYCHA) property in the area is patrolled by PSA 8 at 2794 Randall Avenue in Throggs Neck.

The housing development has the same origins as Stuyvesant Town–Peter Cooper Village, and Riverton Houses in Manhattan, which were also originally developed and owned by MetLife. The name was later unofficially applied to the entire neighborhood surrounding the apartment complex. The name "Parkchester" itself was derived from the two neighborhoods on each side of the site of the housing development — Park Versailles and Westchester Heights.

MetLife displayed an intricate scale model of the proposed development at the 1939 New York World's Fair. The model showed all of the buildings and facilities, and was accurate down to inclusion of each of the 66,000 windows in the complex. The 51 groups of buildings were planned to house 12,000 families.

The Parkchester residential development was originally designed and operated as a self-contained rental community for middle-class families new to home ownership. To that end, there is an abundance of worker- and family-oriented resources, including access to transportation, nearby schools and churches, retail shopping space, and proximity to a major medical center.

It was built from 1939 to 1942 (despite emergency building restrictions during World War II) on the farmland of the Catholic Protectory, a home for orphaned and troubled boys conducted by the Brothers of the Christian Schools, which relocated to Lincolndale (and still exists in) Westchester County. In 1974, approximately one-third of the complex was converted to condominiums, with the remaining portion, now Parkchester South Condominium converted later, in 1986. The complex is best known for its broad, tree-lined walkways between the distinctive red-brown buildings, and for its Works Progress Administration-style terracotta decorations on the buildings, that represent animal and human figures of many types. Many of these are the work of sculptor Joseph Kiselewski.

It was a welcome affordable haven for returning WWII vets and their burgeoning families in the early 1940s. While racially segregated, it peacefully housed people from all religious backgrounds.

In 2015 Parkchester celebrated its 75th anniversary with a family event on the Parkchester North Ball Field. 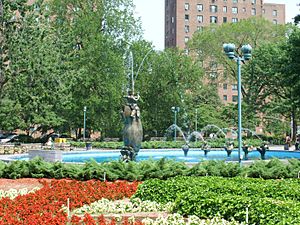 Parkchester is composed of 171 four-sided brick buildings, either eight or 13 stories in height and numbered M (for Main) through 7 and M through 12, respectively. The 13 story buildings have dual elevators positioned side-by-side, the eight-story buildings have but one. Some buildings even have a Terrace level - apartments that are located on the ground floor and noted by the T in front of the apartment letter, i.e., TA, TB, etc. These apartments differ from all others in the community in that they have an additional screened door in the living room section of the apartment that leads out onto a concrete patio where tenants usually put patio/lawn furniture.

The surrounding area, commonly referred to as "Parkchester," is dominated by multi-unit private homes, as well as rental units in buildings unrelated to Parkchester. Retail locations are interspersed throughout the neighborhood as well as along Starling Avenue, McGraw Avenue, Metropolitan Avenue, Tremont Avenue, Unionport Road, and White Plains Road; the latter four streets are considered the backbones of the area.

Points of interest include:

At the heart of Parkchester is the 2 acres (0.81 ha) Aileen B. Ryan Oval, formerly Metropolitan Oval.

Parkchester was designed with aesthetics in mind as evidenced by intricate patterns of brickwork. The development contains 500 terra cotta statuettes and 600 plaques such as bullfighters, animal figurines, soldiers, mermaids and native American chiefs created by sculptor Joseph Kiselewski. They adorn the entrances and can also be seen high on the corners of the taller buildings. In the Aileen B. Ryan Oval, a fountain, named "Fantasia," created by sculptor Raymond Granville Barger, was installed in 1941 and is often the backdrop of photographs. A small collection photographs of the sculptures can be found in "Forgotten New York."

As of 2007, the Parkchester apartment complex includes a very large, thriving, well-established South Asian population: Pakistani, Bangladeshi, Indian, including Catholics, Muslims, and Hindus. There are also a number of Italian, Polish, Irish, Ethiopian and Albanian residents. The Asian residents include Thais, Chinese, Japanese, Vietnamese, Filipinos, Burmese, and Cambodians. Parkchester also is home to a large and longstanding population of Puerto Ricans, like Luis R. Sepulveda who represents the area in the New York State Assembly and has his office on Westchester Avenue. Parkchester has one of the highest concentration of Puerto Ricans in New York City, as is it situated between Soundview and Castle Hill, which are also notable for having a significantly denser Puerto Rican population in comparison to other parts of the Bronx or the city as a whole. While the population is approximately over 20% African American and 38% Latino, the complex once had a whites-only policy. The resident population of the Parkchester apartment complex reflects a broad age distribution and the changing ethnic makeup of the Bronx.

All content from Kiddle encyclopedia articles (including the article images and facts) can be freely used under Attribution-ShareAlike license, unless stated otherwise. Cite this article:
Parkchester, Bronx Facts for Kids. Kiddle Encyclopedia.