Parker Dam is a concrete arch-gravity dam that crosses the Colorado River 155 miles (249 km) downstream of Hoover Dam. Built between 1934 and 1938 by the Bureau of Reclamation, it is 320 feet (98 m) high, 235 feet (72 m) of which are below the riverbed, making it the deepest dam in the world. The dam's primary functions are to create a reservoir, and to generate hydroelectric power. The reservoir behind the dam is called Lake Havasu and can store 647,000 acre⋅ft (798,000,000 m3) or over 210 billion US gallons. The dam straddles the state border at the narrows the river passes through between the Whipple Mountains of California and the Buckskin Mountains of Arizona. 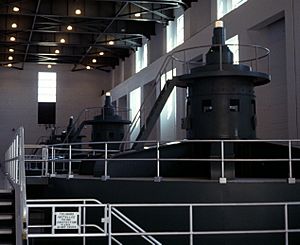 The power plant has four Francis turbines with a combined capacity of 120 MW. Each turbine weighs 60,000 pounds. The head is 72 feet (22 m). It produces electricity at 97% efficiency. Half of the electricity the plant produces is used by the Metropolitan Water District to pump water along the Colorado River Aqueduct, and the rest is sold to utilities in California, Arizona and Nevada. The generation of power is limited by a requirement to keep the water level of Lake Havasu between 440 and 450 feet (134 to 137 meters) for proper operation of pumping plants for the Central Arizona Project and the Colorado River Aqueduct..

Lake Havasu is the water source for the Colorado River Aqueduct. The aqueduct is operated by the Metropolitan Water District of Southern California, which supplies water to almost all cities in the greater Los Angeles, San Bernardino, and San Diego areas. The district paid for nearly the entire cost of the dam, but it is owned and operated by the U.S. Bureau of Reclamation.

Lake Havasu is also the water source for the Central Arizona Project Aqueduct (CAP). The project is designed to provide water for irrigated agricultural areas, as well as municipal water for several Arizona communities, including the metropolitan areas of Phoenix and Tucson.

All content from Kiddle encyclopedia articles (including the article images and facts) can be freely used under Attribution-ShareAlike license, unless stated otherwise. Cite this article:
Parker Dam Facts for Kids. Kiddle Encyclopedia.