Patchen is a ghost town nestled in the Santa Cruz Mountains, in unincorporated west Santa Clara County, California. It is located along the Old Santa Cruz Highway, east of State Route 17.

California became an American territory in 1846. The earliest known permanent white settler in what became Patchen was Charles Henry "Mountain Charley" McKiernan. In the 1850s and 1860s, McKiernan built roads throughout his property on the summit of the mountains and operated a toll road down an old Indian trail near the site. In 1850, McKiernan settled near the lagoon about one mile south. On May 8, 1854, McKiernan and John Taylor, a neighbor, were hunting with Taylor's dog. They both shot at a grizzly bear and McKiernan hit the bear but only dazed it. Not having time to reload his gun, McKiernan hit the bear over the head with his rifle until it broke. The enraged bear rose up and made a snap at Charley, catching him over the left eye and forehead, crushing his skull and tearing out a piece about five by three inches. Three San Jose doctors crafted a silver plate from two Mexican pesos and patched the hole in Charley's head without the benefit of anesthetics. Grizzly bears were reportedly hunted into extinction in California; the last reported sighting of a grizzly in the Santa Cruz Mountains was in November 1885 near Bonny Doon. McKiernan lived until January 16, 1892.

Directly across the road from the town's site is California Historical Landmark marker #448 commemorating the town and the legend of "Mountain Charley." This was the first settlement in the area and centered on the Post Office, called Patchen.

The origins of the name Patchen may go back to ancient times in what is now Patching Parish in Sussex, England. People by the name Patching, Patchen, and Patchin have been listed in that area since the 800 A.D. In 1634, Joseph Patching came to the U.S. and most of the Patchens in America can be traced to him. The name reached the San Francisco Bay Area by way of a famous race horse named "George M. Patchen" and his son, "Smith Patchen," nicknamed "California Patchen," because of his good showing in California in 1862 and again in 1867 in San Jose, San Francisco, and Sacramento.

The post office name appears on government records as having been established at Patchen on March 28, 1872. The post office operated until November 30, 1929. One of the first postmasters was D.C. Feely; in 1885, he represented Patchen at the American Exposition at New Orleans. Feely took a polished wood collection, a soil sample from his farm, and a large exhibit of fresh fruit provided by the local fruit growers. 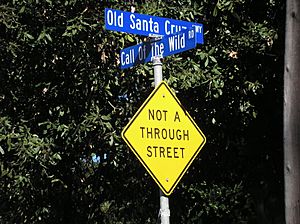 Road named for a novel by Jack London.

The Feely Ranch, located about a quarter mile north of Patchen, was a favored vacation spot of writer Jack London (1876- 1916). London wrote some of his works while vacationing at the ranch. The area is still identified on the official Santa Clara County Assessor's map as "Call of the Wild" (the name of Jack London's famous early novel) and there is a road by the same name north of Patchen.

The Edgemont Hotel was located in Patchen and operated by Mr. and Mrs. L.N. Scott. It was located in the flat area near the road, about where the main parking lot for the Christmas tree farm is today.

In 1855, the California Stage Company was awarded the United States mail contract from San Jose to Santa Cruz and Patchen became the place to change horses. One of the most famous drivers on the mountain route was Charley Parkhurst, who drove over the mountain roads about 1868. Like other stage drivers, Parkhurst wore a heavy muffler, gloves, a buffalo skin coat and cap. Also, like other drivers, Parkhurst had a sharp throaty whistle, used like a horn to warn others that the stage was just around the corner. For these reasons "Charley" was able to hide her identity until her death.

The stage was held up at Patchen on the afternoon of April 1, 1874. After the second robbery in the same area on April 28, 1874 the culprits were captured and sent off to the state prison at San Quentin with the help of "Mountain Charley" and the local posse.

From the 1880s to the early 1900s vacationers, going into the mountains to places such as the Edgemont Hotel in Patchen or to Santa Cruz, filled the roads with horses and wagons.

A narrow gauge railroad opened in 1880 from Los Gatos, along the Los Gatos Creek, to Wright's Station about a mile east of Patchen. From Wright's Station it went through a two mile long tunnel to Laurel, then through other tunnels to Scotts Valley and Santa Cruz. The Southern Pacific bought the railroad around 1900.

At 5:12 a.m. on April 18, 1906, the most disastrous earthquake in California history shook the area. Roads were blocked by landslides, bridges were broken, houses and hotels were shaken to the ground, and the railroad was destroyed. Shifts in the nearby San Andreas Fault caused significant offsets and fissures, especially in Wrights. The railroad was rebuilt and continued to operate until early 1940, when severe storms blocked the route. Southern Pacific considered rebuilding the railroad again, then decided to abandon it. The same year State Route 17 was completed and bypassed Patchen, contributing to its decline.

In 1949, one of the three buildings which remained from the original town of Patchen was torn down by Paul Von Ahnen, who used its hand-hewn timbers to build his house, across the road from the present Christmas tree farm. The building had been the old stage station, built in the 1870s.

On December 29, 1957, fire destroyed the building which had been erected by Joseph Fowler in 1876 as the post office. Fowler had kept the office in his home for the four years prior to that time. The chimney of the old post office stood until 5:04 p.m. on October 17, 1989, when the Loma Prieta earthquake brought it crashing to the ground after more than one hundred years.

The barn, the last remaining building, was disassembled and reassembled on a new foundation in 1985 and is in the process of restoration by the current owner.

The huge concrete reservoir located on the property was fed by springs and used as the water supply for the town.

The land where the town once stood was purchased, piece by piece, during the late 1960s and early 1970s by the current owner and converted to a Christmas tree farm to preserve it from development.

The Christmas tree farm on the site of Patchen is one of the few farms that produces Monterey pines. It also grows Sierra redwoods and the ever-popular Douglas firs. The farm preserves relics from Patchen's heyday, including the water supply reservoir, a historical landmark plaque, and remnants of a bar and hotel.

Owner Jim Beck started buying little pieces of land in the 1960s. He told the Saratoga News that his "original motivation was because there was a lot of explosive growth in the mountains and I didn't want to see all that development going on around me. I considered growing wine grapes or kiwis, but I decided on Christmas trees. This is like an overgrown hobby for me."

A frequent danger in the Santa Cruz Mountains is forest fires. In the mid-1980s, a forest fire came so close to the farm that the trees were threatened. Beck rewarded the firefighters who put the fire out with free Christmas trees for life.

All content from Kiddle encyclopedia articles (including the article images and facts) can be freely used under Attribution-ShareAlike license, unless stated otherwise. Cite this article:
Patchen, California Facts for Kids. Kiddle Encyclopedia.