Pateley Bridge (known locally as Pateley) is a small market town in Nidderdale in the Borough of Harrogate, North Yorkshire, England. Historically part of the West Riding of Yorkshire, it lies on the River Nidd.

It has the Oldest Sweet Shop in England. Established in 1827, it is housed in one of the earliest buildings in Pateley Bridge, dating from the 1660s. Pateley Bridge is also the home of the Nidderdale Museum.

The last Dales agricultural show of the year, the Nidderdale Show, is held annually on the showground by the River Nidd. The show attracts over 14,000 visitors each year.

In the early middle ages the site of Pateley lay in lands of the Archbishop of York, which came to be known as Bishopside. In the 12th century the principal settlement in Bishopside was at Wilsill, rather than Pateley. Pateley was first recorded in 1175 (though the document survives in a later copy), as Patleiagate, with 14th century forms including Patheleybrig(ge). The final elements are clear, deriving from Old Norse gata ('street') and the northern dialect form brig ('bridge') respectively. There is more debate about the Pateley section of the name: the usual explanation is Old English pæþ ('path') in the genitive plural form paða + lēah ('open ground, clearing in a forest'); paða lēah would mean "woodland clearing of the paths", referring to paths up Nidderdale and from Ripon to Craven, which intersected here. However, the Pateley name forms competed in the Middle Ages with forms like Padlewath (1227) and Patheslayewathe which could be from Middle English *padil ('a shallow place in water') + Old Norse vath ('ford') and it could be that they owe something to this name. The local story that the name comes from 'Pate', an old Yorkshire dialect word for 'Badger', is incorrect.

In 1320 the Archbishop of York granted a charter for a market and fair at Pateley.

Until 1964, Pateley was the terminus of the railway line running up Nidderdale from Nidd Valley Junction, near Harrogate. Between 1907 and 1937, the Nidd Valley Light Railway ran farther up the dale. Access is now by road, with an hourly bus service from Harrogate. 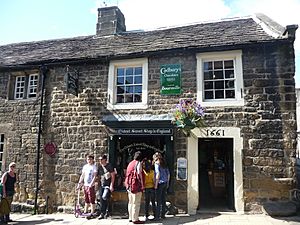 The "Oldest Sweet Shop in England"

The Nidderdale Way and Six Dales Trail both pass through the town.

The town also serves as a sporting hub, with several teams (known collectively as 'The Badgers') competing in football, cricket and crown green bowling.

Pateley is also served by Nidderdale Pool and Leisure Centre. Comprising a 20-metre swimming pool, fully equipped gym and Sport hall and two squash courts, the facility officially opened in 2005 after many years of local fundraising.

The football team, known as Pateley Bridge F.C. currently competes in the 14th level of the footballing pyramid in the Harrogate and District Football League Premier.

The town is also famous for the "Oldest Sweet Shop in England" which was established in 1827 and is validated as the longest continuous trading sweet shop in the world (Guinness World Records Book 2014) and is housed in one of the oldest buildings in Pateley Bridge.

The King Street workshops can be found on King Street & house a talented group of artists and designers. Their studios are open and they include jewellers, milliner, textile art & gifts, sculptors, fine artist and glassblowers.

All content from Kiddle encyclopedia articles (including the article images and facts) can be freely used under Attribution-ShareAlike license, unless stated otherwise. Cite this article:
Pateley Bridge Facts for Kids. Kiddle Encyclopedia.