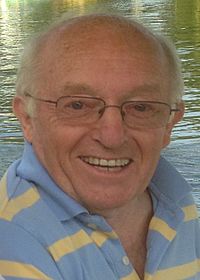 He was born in South Bank, Middlesbrough. He married Jacqueline Skipworth in 1960. The couple had three sons: Gary, Paul and Martin. Daniels was married to his assistant Debbie McGee from 1988 until his death.

Daniels died of a brain tumor in Wargrave, Berkshire, aged 77.

All content from Kiddle encyclopedia articles (including the article images and facts) can be freely used under Attribution-ShareAlike license, unless stated otherwise. Cite this article:
Paul Daniels Facts for Kids. Kiddle Encyclopedia.