He was the fourth cosmonaut in space, the sixth person in orbit, and the eighth person in space.

He was born in Uzyn, Kyiv Oblast of Ukrainian SSR to Roman Porfirievich Popovich (a fireman in a sugar factory) and Theodosia Kasyanovna Semyonova. He had two sisters (one older, one younger) and two brothers (both younger).

During World War II, the Germans occupied Uzyn, and burned documents including Popovich's birth certificate. After the war, these were restored through witness testimony, and although his mother knew that he was born in 1929, two witnesses insisted that Popovich was born in 1930, and so this became his official year of birth.

In 1947, he left vocational school in Bila Tserkva with qualifications as a carpenter. In 1951, Popovich graduated as a construction engineer from a technical school in Magnitogorsk, as well as receiving a pilot's degree.

In 1954, he joined the Young Communist League.

He was married to Marina Popovich, a retired Soviet Air Force colonel and test pilot. They had two daughters. They later divorced, and Popovich married Alevtina Oshegova.

"Service in the Air Force made us strong, both physically and morally. All of us cosmonauts took up sports and PT seriously when we served in the Air Force. I know that Yuri Gagarin was fond of ice hockey. He liked to play goal keeper. Gherman Titov was a gymnastics enthusiast, Andriyan Nikolayev liked skiing, Pavel Popovich went in for weight lifting. I don't think I am wrong when I say that sports became a fixture in the life of the cosmonauts."

He was also a member of the Supreme Soviet of the Ukrainian Soviet Socialist Republic 6th–11th convocations.

After his retirement in 1993, he lived in Moscow.

Popovich died in a hospital in Gurzuf where he had been taken following a stroke on 29 September 2009. Brain hemorrhage was cited as the cause of death. He is buried in Moscow.

In 1952 he graduated from a course at the Stalingrad Military Aviation School near Novosibirsk. He then went on to train at the Military Officers of the Air Force Aviation Training School in Grozny, until 1954 when he joined the Soviet Air Force.

In 1960, he was selected as one of the first group of twenty air force pilots that would train as the first cosmonauts for the Soviet space program. The training took place between March 1960 and January 1961, and Popovich passed his final exams in Cosmonaut Basic Training on 17/18 January 1961. He was appointed as an astronaut on 25 January 1961.

He was considered as a strong candidate for the first spaceflight – but while Yuri Gagarin was ultimately chosen for the Vostok 1 flight, Popovich served as the flight's capcom.

From May to August 1961, he trained to fly on spacecraft "Vostok-2" in a group of astronauts, followed (between September and November 1961) with training to fly "Vostok-3". This flight was cancelled. Between November 1961 and May 1962, he trained as a pilot for "Vostok-4". Between June and August of that year, he received further training in the maintenance of this spacecraft. 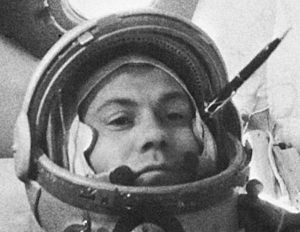 He commanded the space flight Vostok 4 (Russian: Восток-4) in 1962 which, along with Andrian Nikolayev on Vostok 3, was the first time that more than one manned spacecraft were in orbit at the same time. His call sign for this flight was Golden eagle (Бе́ркут).

In January 1964, he became a cosmonaut instructor, becoming deputy commander to the 2nd group of cosmonauts.

Popovich was selected to command one of the Soviet Union's planned moon landings, and trained for this between 1966 and 1968, when the Soviet moon landing plans were scrapped.

In 1968, he was selected as commander for Soyuz 2, but after the death of Vladimir Komarov during the reentry of Soyuz 1, Soyuz 2 was launched without a crew. 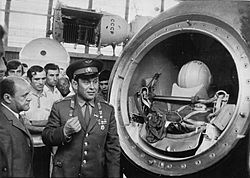 Popovich with Milivoj Jugin in Belgrade

In 1969 he was a senior cosmonaut instructor, and became (by 1972) the Chief of cosmonaut training.

In 1974, he commanded his second (and final) space flight Soyuz 14 (Russian: Союз 14) in 1974. Again, his call sign for this flight was Golden eagle (Бе́ркут). This flight was the first to the Salyut 3 space station.

In 1977, he received a post-graduate degree in technical sciences.

In March 1978, he was on duty in the Flight Control Center for Vladimír Remek's flight aboard Soyuz 28.

From 1978 he was the deputy chief of the Gagarin Cosmonauts Training Center responsible for research and testing work. From 1980 to 1989, he was Deputy chief of the Cosmonaut Training Center. In January 1982, he was removed from the list of active cosmonauts, so that he could serve as Deputy Chief for Scientific Testing and Research at the Center.

A bronze sculpture to Popovich was established in Uzyn.

The name of Pavel Popovich was given to a mountain ridge in Antarctica and to the Mars-crossing asteroid 8444 Popovich.

In 1991, he became director of the Institute Rossiyskogo for Monitoring of Land and Ecosystems, then worked as chairman of the board of directors of the All-Russia Institute of Aero-Photo-Geodesic Studies (VISKhAGI), dealing with the compilation of a land inventory of Russia using images from space.

He had also been the chairman of Ukrainian diaspora organisation in Russia.

He was awarded a Gold Tsiolkovsky Medal by the Academy of Sciences of the USSR and a De La Vaux Medal from the Fédération Aéronautique Internationale.

In Ukraine there was a celebration of the 80th anniversary of the birth of the first Ukrainian astronaut, twice the Hero of the Soviet Union P.P. Popovich.

In the 2002 SciFi Channel documentary Out of the Blue, Popovich relays a sighting of a UFO next to the airplane he was travelling aboard as he was returning home from Washington D.C. with a delegation of scientists. The UFO was seen by everyone on board the plane. It was perfect triangle shaped and emitted a very bright, white light at a distance of about 1.5 kilometres (0.93 mi) and an altitude about 1,000 metres (3,300 ft) above the airplane. The object had an estimated speed of 1,500 kilometres per hour (930 mph) travelling parallel to the airplane and passed and overtook the plane in about 30 to 40 seconds.

Popovich was the president of the UFO association of Russia.

All content from Kiddle encyclopedia articles (including the article images and facts) can be freely used under Attribution-ShareAlike license, unless stated otherwise. Cite this article:
Pavel Popovich Facts for Kids. Kiddle Encyclopedia.