Konstantin Eduardovich Tsiolkovsky (5 September 1857 – 19 September 1935)) was a Russian and Soviet rocket scientist and pioneer of the astronautic theory. Along with the French Robert Esnault-Pelterie, the German Hermann Oberth and the American Robert H. Goddard, he is considered to be one of the founding fathers of modern rocketry and astronautics.

His works later inspired leading Soviet rocket engineers such as Sergei Korolev and Valentin Glushko and contributed to the success of the Soviet space program.

In 1903, he wrote Means of Reaction Devices, which was the first serious study on how to use rockets to launch spacecraft. He calculated the speed needed to reach orbit around the Earth (at 8 km/s). He also wrote that a multi-stage rocket, using liquid fuel could reach that speed. He recommended liquid hydrogen and liquid oxygen, though other fuels could be used. He was correct on these points.

Tsiolkovsky spent most of his life in a log house on the outskirts of Kaluga, about 200 km (120 mi) southwest of Moscow. A recluse by nature, his unusual habits made him seem bizarre to his fellow townsfolk. 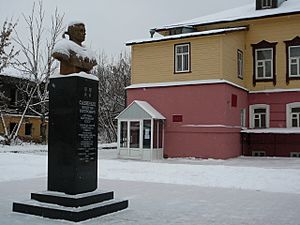 At the age of 10, Konstantin caught scarlet fever and became hard of hearing. He was not admitted to elementary schools because of his hearing problem, so he was self-taught. As a reclusive home-schooled child, he passed much of his time by reading books and became interested in mathematics and physics. As a teenager, he began to contemplate the possibility of space travel.

Tsiolkovsky spent three years attending a Moscow library where Russian cosmism supporter Nikolai Fyodorov worked. He later came to believe that colonizing space would lead to the perfection of the human species, with immortality and a carefree existence. 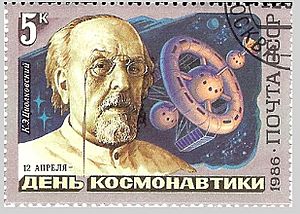 Additionally, inspired by the fiction of Jules Verne, Tsiolkovsky theorized many aspects of space travel and rocket propulsion. He is considered the father of spaceflight and the first person to conceive the space elevator, becoming inspired in 1895 by the newly constructed Eiffel Tower in Paris.

Afterwards, Tsiolkovsky passed the teacher's exam and went to work at a school in Borovsk near Moscow. He also met and married his wife Varvara Sokolova during this time. Despite being stuck in Kaluga, a small town far from major learning centers, Tsiolkovsky managed to make scientific discoveries on his own. 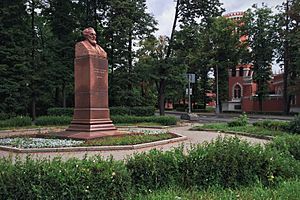 Although Tsiolkovsky supported the Bolshevik Revolution, he did not particularly thrive under a communist system. Eager to promote science and technology, the new Soviet government elected him a member of the Socialist Academy in 1918. He worked as a high school mathematics teacher until retiring in 1920 at the age of 63. In 1921, he received a lifetime pension.

Only late in his lifetime was Tsiolkovsky honored for his pioneering work. In particular, his support of eugenics made him politically unpopular. However, from the mid 1920s onwards the importance of his other work was acknowledged, and he was honoured for it and the Soviet state provided financial backing for his research.

Tsiolkovsky died in Kaluga on 19 September 1935 after undergoing an operation for stomach cancer. He gave his life's work to the Soviet state. 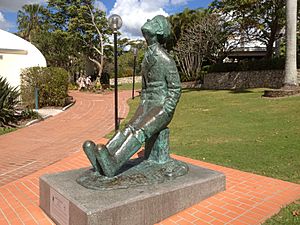 Although many called his ideas impractical, Tsiolkovsky influenced later rocket scientists throughout Europe. Leading Soviet rocket-engine designer Valentin Glushko and rocket designer Sergey Korolev studied Tsiolkovsky's works as youths, and both sought to turn Tsiolkovsky's theories into reality. In particular, Korolev saw traveling to Mars as the more important priority until in 1964 he decided to compete with the American Project Apollo for the Moon.

Tsiolkovsky wrote a book called The Will of the Universe. The Unknown Intelligence in 1928 in which he had a theory of panpsychism. He believed humans would eventually colonize the Milky Way galaxy. His thought preceded the Space Age by several decades, and some of what he foresaw in his imagination has come into being since his death.

In 1989, Tsiolkovsky was inducted into the International Air & Space Hall of Fame at the San Diego Air & Space Museum.

All content from Kiddle encyclopedia articles (including the article images and facts) can be freely used under Attribution-ShareAlike license, unless stated otherwise. Cite this article:
Konstantin Tsiolkovsky Facts for Kids. Kiddle Encyclopedia.