Peakhurst is a suburb in Southern Sydney, or the St George Area, in the state of New South Wales, Australia 21 kilometres south of the Sydney central business district. Peakhurst is in the local government area of the Georges River Council.

Peakhurst was named after landholder John Robert Peake, who bought 10 acres of land near the junction of the present Forest Road and Henry Lawson Drive in 1838. He gave a block of land on which the Wesleyan Church was built in 1855.

The area was originally part of an 1808 land grant to Captain John Townson. John Robert Peake bought his land from William Hebblewhite in 1838. School Inspector Huffer suggested that Peake's name be used to name the suburb when the public school was founded in 1871. The post office opened in 1885.

The first industry in the area was timber-cutting, due to the surrounding natural forests being thick with a variety of woods, especially turpentine. The timber was carted to Sydney by bullock teams. As the land was cleared, orchardists followed the timber-cutters. 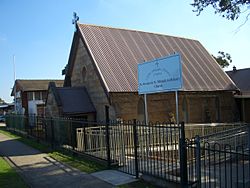 According to the 2006 Australian Bureau of Statistics Census of Population, there were 9,113 people usually resident in Peakhurst. 23.4% stated they were born overseas with the top countries of birth being China 2.9%, United Kingdom 2.7% and Republic of Macedonia 1.4%. English was stated as the only language spoken at home by 7% (surely not correct) of residents and the most common other languages spoken were Arabic 4.9%, Greek 4.6% and Cantonese 3.6%. The most common responses for religious affiliation were Catholic 28.1%, Anglican 21.6% and Orthodox 10.1%.

All content from Kiddle encyclopedia articles (including the article images and facts) can be freely used under Attribution-ShareAlike license, unless stated otherwise. Cite this article:
Peakhurst, New South Wales Facts for Kids. Kiddle Encyclopedia.