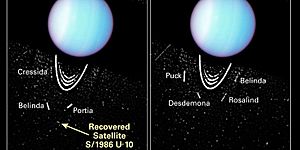 Perdita is a closer moon to Uranus. Perdita's discovery was not simple. The first pictures of Perdita were taken by the Voyager 2 spacecraft in 1986, but it was not recognized from the photographs for more than a decade. In 1999, the moon was noticed by Erich Karkoschka and reported. But because no further pictures could be taken to confirm its existence, it was thought to be non-existent in 2001. However, in 2003, pictures taken by the Hubble Space Telescope managed to pick up an object where Perdita was supposed to be, finally confirming its existence.

Following its discovery in 1999, Perdita was given the designation of S/1986 U 10. It was named after the daughter of Leontes and Hermione in William Shakespeare's play The Winter's Tale. The moon is also designated Uranus XXV.

Perdita belongs to Portia Group of moons, which also includes Bianca, Cressida, Desdemona, Portia, Juliet, Cupid, Rosalind and Belinda. These moons have similar orbits and photometric properties. Unfortunately, other than its orbit, radius of 15 km and geometric albedo of 0.08 almost nothing is known about it.

All content from Kiddle encyclopedia articles (including the article images and facts) can be freely used under Attribution-ShareAlike license, unless stated otherwise. Cite this article:
Perdita (moon) Facts for Kids. Kiddle Encyclopedia.