Pflugerville is a city in Travis County, Texas with a small portion in Williamson County. The population was 46,936 at the 2010 census. Pflugerville is a suburb of Austin and part of the Austin–Round Rock–San Marcos Metropolitan Statistical Area.

According to the 2010 United States Census Bureau, the city has a total land area of 22.32 square miles. And Pflugerville has 40.39 square miles in the extraterritorial jurisdiction. The city has one body of water - Lake Pflugerville - created in 2005 to serve as a water reservoir and recreation area, and two creeks, Gilleland Creek and Wilbarger Creek. A local school group Wilbarger Water Watchers in association with the LCRA monitor the waters of Wilbarger Creek to ensure it meets the United States Environmental Protection Agency's national standard.

In response to a recent influx of higher sales tax revenue, the City Council lowered the property tax rate annually beginning in 2003 through 2014. However notice of an increase in the property tax rate was announced in late 2015, for the first time in more than a decade, to accommodate for $53 million in transportation and park bond projects approved by voters in a 2014 bond election.

While a mile stretch of Interstate 35 is often referred by local media and residents as "in Pflugerville", the city of Austin actually controls this land, either as part of the city or through its extraterritorial jurisdiction. In November 2006, the first parts of a central Texas tollway system opened, including State Highway 130 and State Highway 45 increasing accessibility to Pflugerville. Approximately three miles of 130 run through Pflugerville, including the intersection of 45 and 130. The city is using this land to attract major commercial development, thereby improving its tax base and providing an opportunity to lower property tax rates. One such development, Stone Hill Town Center opened and includes The Home Depot, Best Buy, SuperTarget, At Home, Bealls, Dick's Sporting Goods, PETCO, Ross Dress for Less, Office Depot, 24 Hour Fitness, Cinemark Theatres and a St. David's HealthCare 24-hour emergency care facility. With its close proximity to the Austin Executive Airport and SH 130, the connectivity of the area is attracting businesses and bringing jobs to Pflugerville.

Before the Stone Hill development and the nearby Pfluger Crossing (a development that includes a Wal-Mart Supercenter) opened their first stores in 2007, the city's two largest retailers were an Albertsons grocery store (which operated from 1996 to 2006) near Pflugerville High School and an H-E-B grocery store (operating since 2000) east of downtown.

In 2010, RRE Austin Solar broke ground on what will be one of the nation's largest solar farms, the 60 MW Pflugerville Solar Farm, but as of July 2013 no significant construction has begun.

PCDC has helped to develop the 130 Commerce Center, at the corner of State Highway 130 and Pecan (FM 1825), which is an office park with FedEx, TrackingPoint, Community Impact Newspaper, and D-bats, as well as two hotels and a conference center anticipated in 2016. EOS and Medway Plastics are planned tenants.

The area was initially settled by German immigrant Henry Pfluger, Sr. (1803–67) and members of his family from late 1849 into early 1850. Pfluger had been a wealthy farmer in Germany, but lost all of his property during the Prussian War. He arrived in the country with $1,600 and purchased 160 acres (0.65 km2) of land two miles (3 km) east of Austin from John Liese, a brother-in-law who had immigrated before him. In 1853, Pfluger paid Liese $960 for a 960-acre (3.9 km2) tract of land in an area known as Brushy Knob. There, the family lived in a five-room log cabin and raised corn, wheat, rye, beans, sweet potatoes, and sugar cane. The Pfluger family also owned several slaves, some whom were conversant in German.

The beginnings of a community wouldn't develop until after the Civil War. During the 1870s, a school and Lutheran church were established at the settlement. The first commercial business in the community was a general store built by Louis Bohls in 1890. Two local organizations: the German-American Mutual Assistance Foundation, to insure residents against natural disasters; and "Pflugerville Schuetzen and Kegel Verein," a shooting and bowling club. Pflugerville's post office opened in 1893 with Louis Bohls serving as its first postmaster. The population reached approximately 250 during the mid-1890s and a small downtown developed even though most residents did their branching and shipping in Round Rock, eight miles (13 km) to the northwest. Wooden buildings were erected on Main Street and Pecan Street, many by Conrad Pfluger – one of Henry Pfluger, Sr.'s eight sons. In 1904, the Missouri–Kansas–Texas Railroad (MKT) completed its track between Georgetown and Austin, passing just outside Pflugerville. Its close proximity to the line, however, caused the community to grow rapidly. On February 19, 1904, the town site of Pflugerville was platted by George Pfluger and his son, Albert, dedicating streets and alleys for the town from the Alexander Walter and C. S. Parrish Surveys in Travis County. The plat consisted of sixteen blocks, rights-of-way, and the depot grounds to the MKT. The first addition to the town was the six-block Wuthrich Addition, platted on November 22, 1904. The first cotton gin was built by Otto Pfluger in 1904. It was destroyed by fire in 1931 and a new one was built at the same location. On June 8, 1906, the Farmers State Bank of Pflugerville opened with William Pfluger as its president and A.W. Pfluger as cashier. The first issues of the Pflugerville Press, a weekly newspaper, began publishing on August 7, 1907 and operated through October 29, 1942. In 1910, black workers who worked in the Pflugerville cotton industry were not allowed to move into the town. Farmer La Rue Norton, who owned 1,200 acres (4.9 km2) of land west of Pflugerville, set aside an acre and sold lots to the workers at $50 each. County records listed the settlement as Pflugerville's Colored Addition in April 1910. The first German Day celebration in Pflugerville took place on May 29, 1910. In 1913, H.S. Pfluger built the Sky Dome Theater, which showed motion pictures to the accompaniment of a player piano on Friday and Saturday nights. It closed in 1928. In the early 1920s, Pflugerville was home to an estimated 500 residents. During that period, several area school districts consolidated with Pflugerville High School. Around 580 people lived in the community in 1930.

The arrival of the Great Depression halted what had been a lengthy period of growth in Pflugerville. The population fell slightly to 500 in 1940. In the years immediately after World War II, the community lost around a quarter of its population as citizens moved to Austin and other larger cities with greater employment opportunities. Despite the challenges of population loss and limited economic development, Pflugerville managed to survive. The community gained national attention when the Pflugerville Panthers won 55 consecutive football games from 1958 to 1962.

Efforts to incorporate Pflugerville culminated in the holding of an election on July 24, 1965. A total of 102 votes were cast with 60 (58.8%) supporting the proposition and 42 (41.2%) opposed. The town incorporated under a commission form of government. On April 4, 1970, an election was held that changed the form of government from commissioner to aldermanic, providing for an elected mayor and five aldermen. Pflugerville's population began to rebound after its incorporation and by the 1970 census, it stood at 549. That figure had risen to 745 by 1980. A weekly newspaper, the Pflugerville Pflag, began publication in 1980. During most of the 1980s, new development made Pflugerville one of the fastest growing cities in Texas. Estimates from the late 1980s were as high as 3,900. Although the boom was slowed by a statewide recession, Pflugerville's population grew to 4,444 in 1990.

Throughout the 1990s, the city of Austin experienced a rapid rise in its population. This was also the case in suburban areas surrounding the city. Pflugerville and communities such as Cedar Park, Round Rock, and Georgetown came to or more than doubled in size by the next census in 2000. Since then, Pflugerville has grown by approximately 20,000, with the total number of residents approaching 40,000 as of 2008. The 2010 Census placed Pflugerville's population at 46,936, however with annexations since the 2010 census, the city's own population estimate is estimated to be 53,752 as of July 2013.

The 2006 NBC television drama Friday Night Lights was filmed in Pflugerville and Austin, Texas. They used Pflugerville High School's stadium, Kuempel Stadium, to film the football games. Since then American Crime has filmed at the Pflugerville Justice Center as recently as 2014.

There were 15,789 households out of which 45.0% had children under the age of 18 living with them, 59.4% were married couples living together, 13.4% had a female householder with no husband present, and 22.4% were non-families. 17.0% of all households were made up of individuals and 4.2% had someone living alone who was 65 years of age or older. The average household size was 2.96 and the average family size was 3.35.

There were 5,146 households out of which 56.4% had children under the age of 18 living with them, 72.4% were married couples living together, 10.4% had a female householder with no husband present, and 14.0% were non-families. 10.1% of all households were made up of individuals and 1.7% had someone living alone who was 65 years of age or older. The average household size was 3.15 and the average family size was 3.39. 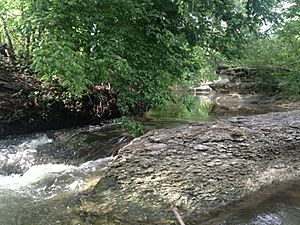 The City of Pflugerville has more than 15 parks, 30.5 miles of trail, 16 playscapes, 500 acres of parks and 528 acres of open space all within Pflugerville's city limits. Many of the parks offer a full range of amenities from pavilions, gazebos and playgrounds to pools and picnic areas.

Pfluger Park is along Gilleland Creek and is the site of the city's annual German festival, the Deutschen Pfest, held the third weekend in May. The park includes the Fallen Warrior Memorial, trails, a grove, playground, volleyball courts, basketball court, picnic areas and large shade trees. Pfluger Park is also used for music in the park events and festivals.

The Northeast Metro Skate/BMX Park opened Tuesday, September 18, 2012. The 349-acre Northeast Metropolitan Park is a multiple-use recreational area with soccer fields, multi-use fields, baseball fields, a cricket field, basketball court, tennis court, and a skate park. Amenities include restrooms, playgrounds, group shelters, picnic tables with grills, concession building for rent, and a water play area. While not located in the city limits but at the north end of Austin, the park does provide additional amenities to the community.

In 2015, the city purchased a 237-acre tract of land for a community park with a new sports complex and nature areas for $4.276 million. It will be home to the future sports complex as approved by the voters in the 2014 General Bond Election.

All content from Kiddle encyclopedia articles (including the article images and facts) can be freely used under Attribution-ShareAlike license, unless stated otherwise. Cite this article:
Pflugerville, Texas Facts for Kids. Kiddle Encyclopedia.