The Piave (Latin: Plavis) is a river in northern Italy. It begins in the Alps and flows southeast for more of 220 kilometres (140 mi) into the Adriatic Sea near the city of Venice. It is the longest river of the Veneto region.

Its average yearly discharge (volume of water which passes through a section of the river per unit of time) is 137.0 m3/s (4,840 cu ft/s) at Nervesa della Battaglia in the Treviso province. 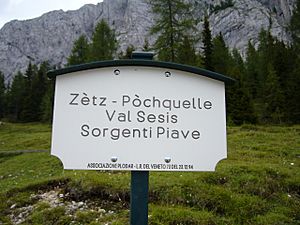 Source of the Piave river

The Piave river starts on the Eastern Alps (the Carnic Alps), on the southern slopes of the Monte Peralba, in the comune of Sappada, province of Belluno, at an elevation of about 2,037 m (6,683 ft), near the border with the Friuli-Venezia Giulia region.

The river flows only through the Belluno, Treviso and Venice provinces in the Veneto region and flows into the Adriatic Sea to the northwest of Venice, next to the port of Cortellazzo, between the comuni of Eraclea and Jesolo. To the left of the mouth, there is a lagoon called Laguna del Mort formed by an old branch of the river.

After flowing, from northeast to southwest, through the Belluno province, the Piave flows through the following comuni: 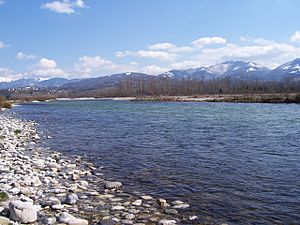 The main tributaries of the Piave river are:

There was an important battle in 1809 along the river during the Napoleonic Wars where the Franco-Italian army fought against Austrian troops.

All content from Kiddle encyclopedia articles (including the article images and facts) can be freely used under Attribution-ShareAlike license, unless stated otherwise. Cite this article:
Piave Facts for Kids. Kiddle Encyclopedia.