Pine Township is a township in Lycoming County, Pennsylvania, United States. The population was 294 at the 2010 census, down from 329 at the 2000 census. It is part of the Williamsport Metropolitan Statistical Area.

Pine Township was formed from parts of Brown, Cummings and Cogan House Townships on January 27, 1857. It was originally going to be called Kingston Township, for the Kingston House what was in English Center, but the name was changed to Pine in recognition of the vast stands of pine trees that covered much of the township.

The geography and geology of Pine Township have played an important role in its history. Pine Township lies within the southern limits of the most recent ice age. This land was once covered with glaciers. As the glaciers receded they scoured the land creating a moraine, knob like hills, and kettle holes. Some of these kettles are at the top of the hill. This has caused the unusual formation of a swamp at the top of a hill. The effects of glaciation created soil characteristics that limited successful farming and steep hillsides that also cut down on the amount of farmable land. Therefore, trees have thrived in Pine Township. The old-growth forests were harvested in the mid-to-late 19th century during the lumber era that swept throughout the hills and valleys of Pennsylvania. Massive stands of hemlock and pine were chopped down and floated down Little Pine and Pine Creeks to the sawmills of Williamsport. Since the end of the lumbering era and thriving second growth forest has grown throughout Pine Township.

John Norris and his wife were among the first to settle in Pine Township. They opened a "seminary" or school for girls in the wilderness. During the years it was opened it was one of very few schools in such a remote part of the country to focus on educating teen aged girls.

A failed colony known as "English Settlement" plays a role in the history of northern Lycoming County. The Reverend John Hey, who claimed to be part of the "Independent Church of England" dreamt of acquiring a vast amount of land in the wilderness and establishing a utopia. Hey and some investing partners acquired 110,859 acres (448.63 km2) of land for $21,757 in 1805. Hey next travelled to England to convince his countrymen, mostly from Chard, Somerset, England, to settle his new colony. Fifteen families agreed to move to Pine Township. When they arrived they did not find the paradise that was described to them by John Hey. What they found was a wilderness of massive trees, rocks and rocky soil. The Englishmen were not prepared for this. They had no experience with clearing any land for farming and the land that they managed to clear was too rocky for farming. The English Settlement was abandoned ten years after its founding. Those who managed to survive moved to more fertile land in the nearby area.

The villages of Oregon Hill and English Center were founded by survivors of the failed English Settlement. Oregon Hill was the location of two churches, a blacksmith shop, and two stores along with several homes. The settlers of Oregon Hill were surprised to find that the land in the area was fertile unlike much of the surrounding land. English Center on Little Pine Creek was a milling town.

The English Center Suspension Bridge was added to the National Register of Historic Places in 1978. 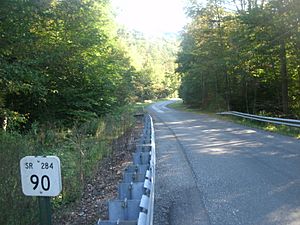 There were 148 households, out of which 19.6% had children under the age of 18 living with them, 57.4% were married couples living together, 4.1% had a female householder with no husband present, and 35.8% were non-families. 27.7% of all households were made up of individuals, and 16.9% had someone living alone who was 65 years of age or older. The average household size was 2.22 and the average family size was 2.71.

Residents of Pine Township may attend the local, public schools operated by Wellsboro Area School District which provides full day kindergarten through 12th grade. In 2013, the District's enrollment declined to 1,526 students in kindergarten through 12th grade. In 2013, Wellsboro Area School District ranked 311th out of 498 public schools for academic achievement of its pupils, by the Pittsburgh Business Times.

Pine Township residents may also apply to attend any of the Commonwealth's 14 public cyber charter schools (in 2013) at no additional cost to the parents. The resident's public school district is required to pay the charter school and cyber charter school tuition for residents who attend these public schools. By Commonwealth law, if the District provides transportation for its own students, then the District must provide transportation to any school that lies within 10 miles of its borders. Residents may also seek admission for their school aged child to any other public school district. When accepted for admission, the student's parents are responsible for paying an annual tuition fee set by the Pennsylvania Department of Education. In 2012, the tuition fees for Wellsboro Area School District were: Elementary School - $8,343.38, High School - $9,951.51.

BLaST Intermediate Unit #17 provides a wide variety of services to children living in its region which includes Pine Township. Early screening for learning related disabilities, special educations services, speech and hearing therapy and many other services like driver education are available. Services for children during the preschool years are provided without cost to their families when the child is determined to meet eligibility requirements.

All content from Kiddle encyclopedia articles (including the article images and facts) can be freely used under Attribution-ShareAlike license, unless stated otherwise. Cite this article:
Pine Township, Lycoming County, Pennsylvania Facts for Kids. Kiddle Encyclopedia.