Chard is a town and a civil parish in the English county of Somerset. It lies on the A30 road near the Devon border, 15 miles (24 km) south west of Yeovil. The parish has a population of approximately 13,000 and, at an elevation of 121 metres (397 ft), Chard is the southernmost and one of the highest towns in Somerset. Administratively Chard forms part of the district of South Somerset.

The name of the town was Cerden in 1065 and Cerdre in the Domesday Book of 1086. After the Norman Conquest, Chard was held by the Bishop of Wells. The town's first charter was from King John in 1234. Most of the town was destroyed by fire in 1577, and it was further damaged during the English Civil War. A 1663 will by Richard Harvey of Exeter established Almshouses known as Harvey's Hospital. In 1685 Chard was one of the towns in which Judge Jeffreys held some of the Bloody Assizes after the failure of the Monmouth Rebellion.

Textile manufacture was important to the town during the Middle Ages. Chard is the birthplace of powered flight as in 1848 John Stringfellow first demonstrated that engine-powered flight was possible. Percy and Ernist Petter, who formed Westland Aircraft Works, witnessed some of Stringfellow's demonstrations in Chard and often asked for help in the formation of Westland's first aircraft development factory on the outskirts of Yeovil. AgustaWestland now holds the Henson and Stringfellow lecture yearly for the RAeS. James Gillingham developed articulated artificial limbs. Chard is a key point on the Taunton Stop Line, a World War II defensive line.

The Chard Canal was a tub boat canal built between 1835 and 1842. Chard Branch Line was created in 1860 to connect the two London and South Western Railway and Bristol and Exeter Railway main lines and ran through Chard until 1965.

Local folklore relates that the town has a very unusual and unique feature: a stream running along either side of Fore Street. One stream eventually flows into the Bristol Channel and the other reaches the English Channel. Chard Reservoir, approximately a mile north east of the town, is a Local Nature Reserve, and Snowdon Hill Quarry a geological Site of Special Scientific Interest. Major employers in the town include Numatic International Limited and the Oscar Mayer food processing plant. There are a range of sporting and cultural facilities, with secondary education being provided at Holyrood Academy; religious sites including the Church of St Mary the Virgin which dates from the late 11th century.

Chard's name was Cerden in 1065 and Cerdre in the Domesday Book of 1086 and it means "house on the chart or rough ground" (Old English: ćeart + renn). Before the Norman Conquest Chard was held by the Bishop of Wells. The town's first charter was from King John and another from the bishop in 1234, which delimited the town and laid out burgage holdings in 1-acre (4,000 m2) lots at a rent of twelve pence per year. The parish of Chard was part of the Kingsbury Hundred,

Most of the town was destroyed by fire in 1577. After this time the town was largely rebuilt including Waterloo House and Manor Court House in Fore Street which were built as a house and courtroom, and have now been converted into shops and offices. Further damage to the town took place during the English Civil War with both sides plundering its resources, particularly in 1644 when Charles I spent a week in the town.

A 1663 will by Richard Harvey of Exeter established Almshouses which became Harvey's Hospital. These were rebuilt in 1870 largely of stone from previous building. In 1685 Chard was one of the towns in which Judge Jeffreys held some of the Bloody Assizes after the failure of the Monmouth Rebellion in which 160 men from Chard joined the forces of the Duke of Monmouth. The subsequent hangings took place on Snowden Hill to the west of the town. As elsewhere in this area, the 'finger-post' road-sign at this spot is painted red and is known as 'Red Post' to commemorate the executions.

There was a fulling mill in the town by 1394 for the textile industry. After 1820 this expanded with the town becoming a centre for lace manufacture led by manufacturers who fled from the Luddite resistance they had faced in the English Midlands. Bowden's Old Lace Factory and the Gifford Fox factory are examples of the sites constructed. The Guildhall was built as a Corn Exchange and Guildhall in 1834 and is now the Town Hall.

On Snowdon Hill is a small cottage which was originally a toll house built by the Chard Turnpike trust in the 1830s, to collect fees from those using a road up the hill which avoided the steep gradient. 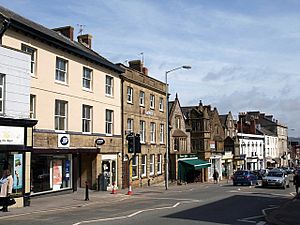 Chard claims to be the birthplace of powered flight, as it was here in 1848 that the Victorian aeronautical pioneer John Stringfellow (1799–1883) first demonstrated that engine-powered flight was possible through his work on the Aerial Steam Carriage. James Gillingham (1839–1924) from Chard pioneered the development of articulated artificial limbs when he produced a prosthesis for a man who lost his arm in a cannon accident in 1863. Chard Museum has a display of Gillingham's work.

Chard was a key point on the Taunton Stop Line, a World War II defensive line consisting of pillboxes and anti-tank obstacles, which runs from Axminster north to the Somerset coast near Highbridge. In 1938 a bomb proof bunker was built behind the branch of the Westminster Bank. During the war it was used to hold duplicate copies of the bank records in case its headquarters in London was destroyed. It was also used to store the emergency bank note supply of the Bank of England. There has also been speculation that the Crown Jewels were also stored there, however this has never been confirmed.

Action Aid, the International Development Charity, had their headquarters in Chard when they started life in 1972 as Action in Distress. The Supporters Services department of the charity is still based in Chard. 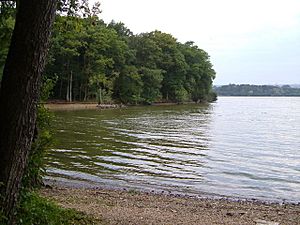 At an altitude of 121 metres (397 ft), Chard is the highest town in Somerset, and is also the southernmost. The suburbs include: Crimchard, Furnham, Glynswood, Henson Park and Old Town. Local folklore claims that the town has a very unusual and unique feature, a stream running along either side of Fore Street. One stream eventually flows into the Bristol Channel and the other reaches the English Channel. This situation changed when the tributary of the Axe was diverted into the Isle; the gutter in Holyrood Street, though, still flows into the River Axe and therefore it is still true it lies on the watershed and that two gutters within the down eventually drain into the Bristol Channel and the English Channel.

The 36.97 hectares (91.4 acres) Chard Reservoir, around a mile northeast of the town, is a Local Nature Reserve. It is used for dog walking, fishing and birdwatching, with a bird hide having been installed. Species which are spotted regularly include herons, kingfishers, cormorants, grebes, ducks and also a wide range of woodland songbirds. Others include the great white egret, cattle egret, and spotted redshank.

Snowdon Hill Quarry is a 0.6 hectare (1.3 acre) geological Site of Special Scientific Interest on the western outskirts. The site shows rock exposures through the Upper Greensand and Chalk, containing fossil crustaceans which are both unique and exceptionally well-preserved making it a key locality for the study of palaeontology in Britain. The unit has been dated to the subdivision of the Chalk known as the Turrilites acutus Zone, named after one of the characteristic fossils, which was laid down in the Middle Cenomanian era between 99.6 ± 0.9 MA and 93.5 ± 0.8 MA (million years ago).

There are also caves in Chard, first recorded in a charter of 1235 as being used by stonemasons, which provided local building stone. The cave is smaller than when it was used as a quarry as part of the roof has fallen in but a cave 20 feet (6.1 m) below ground still exists with the remains of the supporting pillars left when it was being worked.

Along with the rest of South West England, Chard has a temperate climate which is generally wetter and milder than the rest of the country. The annual mean temperature is approximately 10 °C (50.0 °F). Seasonal temperature variation is less extreme than most of the United Kingdom because of the adjacent sea temperatures. The summer months of July and August are the warmest with mean daily maxima of approximately 21 °C (69.8 °F). In winter mean minimum temperatures of 1 °C (33.8 °F) or 2 °C (35.6 °F) are common. In the summer the Azores high pressure affects the south-west of England, however convective cloud sometimes forms inland, reducing the number of hours of sunshine. Annual sunshine rates are slightly less than the regional average of 1,600 hours. In December 1998 there were 20 days without sun recorded at Yeovilton. Most the rainfall in the south-west is caused by Atlantic depressions or by convection. Most of the rainfall in autumn and winter is caused by the Atlantic depressions, which is when they are most active. In summer, a large proportion of the rainfall is caused by sun heating the ground leading to convection and to showers and thunderstorms. Average rainfall is around 700 mm (28 in). About 8–15 days of snowfall is typical. November to March have the highest mean wind speeds, and June to August have the lightest winds. The predominant wind direction is from the south-west. 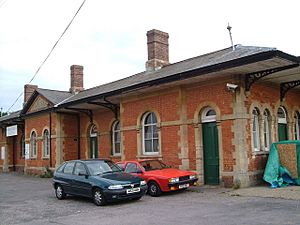 From 1842 Chard was the terminus of the Chard Canal, a tub boat canal that joined the Bridgwater and Taunton Canal at Creech St. Michael. It had four aqueducts, three tunnels and four inclined planes along its 13.5-mile (21.7 km) length. It took seven years to construct and cost about £140,000 (£10.3 million in 2015).

In the 1860s the town became the terminus of two railway lines. The first was opened in 1863 by the London and South Western Railway (LSWR) as a short branch line from their main line. This approached the town from the south. The second and longer line was opened by the Bristol and Exeter Railway (B&ER) in 1866 and ran northwards, close to the route of the canal, to join their main line near Taunton. From 1917 they were both operated by one company, but services were mostly advertised as though it was still two separate lines. It was closed to passengers in 1962 and freight traffic was withdrawn a few years later.

The LSWR's station (later known as Chard Town) opened in 1860 with a single platform, and the B&ER's (variously known as Chard Joint or Chard Central) in 1866. For five years LSWR trains continued to call at Chard Town and then reversed to the connecting line and then resumed their forward journey to the Joint station. In 1871 a new platform was opened on the connecting line; this closed to passengers on 1 January 1917 but the town station was the main goods depot for the town until it finally closed on 18 April 1966. Passenger trains ceased to operate to Chard Central on 11 September 1962, and private goods traffic on 3 October 1966. The station building and train shed still stand and are in use by engineering companies. 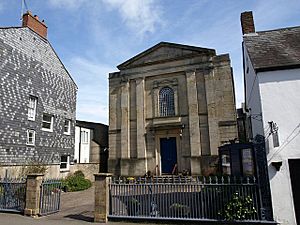 The Anglican Church of St Mary the Virgin dates from the late 11th century and was rebuilt in the 15th century. The tower contains eight bells, of which two were made in the 1790s by Thomas Bilbie of the Bilbie family in Cullompton. The three-stage tower has moulded string courses and an angle stair turret in the north-west corner. The church has been designated by English Heritage as a grade I listed building. There is a church room, built in 1827. The Baptist Church in Holyrood Street was built in 1842.

All content from Kiddle encyclopedia articles (including the article images and facts) can be freely used under Attribution-ShareAlike license, unless stated otherwise. Cite this article:
Chard, Somerset Facts for Kids. Kiddle Encyclopedia.