Crewkerne /ˈkruːkərn/ is a town and electoral ward in Somerset, England, situated 9 miles (14 km) south west of Yeovil and 7 miles (11 km) east of Chard in the South Somerset district close to the border with Dorset. The civil parish of West Crewkerne includes the hamlets of Woolminstone and Henley. The town lies on the River Parrett, A30 road and West of England Main Line railway.

The earliest written record of Crewkerne is in the 899 will of Alfred the Great who left it to his youngest son Aethelweard. After the Norman conquest it was held by William the Conqueror and in the Domesday Survey of 1086 was described as a royal manor. Crewkerne Castle was possibly a Norman motte castle. The town grew up in the late mediaeval period around the textile industry, its wealth preserved in the fifteenth century Church of St Bartholomew. During the 18th and 19th centuries the main industry was cloth making, including webbing, and sails for the Royal Navy.

Local ecological sites include the Bincombe Beeches Local Nature Reserve and the Millwater biological Site of Special Scientific Interest. Crewkerne railway station is served by South West Trains on the main south western railway line. There are local supermarkets and local shops, and some local industry. The town is the birthplace of several notable people and has varied cultural and sporting facilities including those at Wadham Community School. 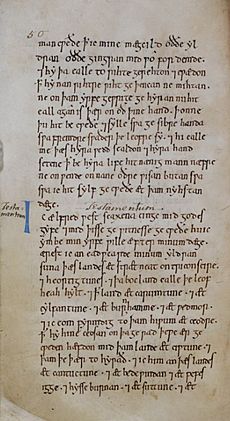 The name Crewkerne is thought to be derived from Cruc-aera; from the British cruc - a spur of a hill, and the Old English aera - a house, especially a storehouse. The town was known as Crocern, or Cruaern in the 899 will of Alfred the Great when he left it to his younger son Æthelweard, and by 1066 the manor was held by Edith Swanneck mistress of King Harold. After the Norman conquest it was held by William the Conqueror and the church estate was given to the Abbaye-aux-Hommes in Caen, Normandy. In the Domesday Survey of 1086 it was described as a royal manor.

In 1499, John de Combe, a precentor of Exeter Cathedral and former vicar of Crewkerne, founded Crewkerne Grammar School. The school survived until 1904.

The parish was part of the hundred of Crewkerne.

Crewkerne Castle was possibly a Norman motte castle on a mound to the north-west of the town, which is known as Castle Hill. The town grew up in the late mediaeval period around the textile industry, its wealth preserved in its fifteenth century parish church. It later prospered as a coaching stop in the Georgian period.

The Manor Farmhouse in Henley was built from hamstone in the early 17th century, but possibly incorporates medieval fragments. The building is designated by English Heritage as a Grade II* listed building. During the 18th and 19th centuries the main industry was cloth making, including webbing, and sails for the Royal Navy. 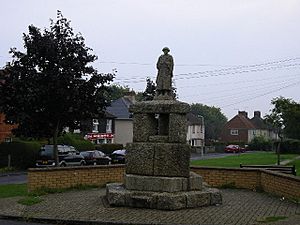 The town lies west of the River Parrett. The main residential areas are around the town centre with Kithill and Park View to the South and Wadham Park to the North.

In the northern outskirts of the town is the Bincombe Beeches 5 hectares (12 acres) Local Nature Reserve. which is managed by the town council and includes a line of beech trees, some of which are between 150 and 200 years old. Between 2002 and 2005 grants were obtained to improve access to the site and support the planting of new trees. The Millwater biological Site of Special Scientific Interest consists of a complex mosaic of pasture, wet grassland, tall-herb fen, standing and running water, Alder and Willow carr.

Along with the rest of South West England, Crewkerne has a temperate climate which is generally wetter and milder than the rest of the country. The annual mean temperature is approximately 10 °C (50.0 °F). Seasonal temperature variation is less extreme than most of the United Kingdom because of the adjacent sea temperatures. The summer months of July and August are the warmest with mean daily maxima of approximately 21 °C (69.8 °F). In winter mean minimum temperatures of 1 °C (33.8 °F) or 2 °C (35.6 °F) are common. In the summer the Azores high pressure affects the south-west of England, however convective cloud sometimes forms inland, reducing the number of hours of sunshine. Annual sunshine rates are slightly less than the regional average of 1,600 hours. In December 1998 there were 20 days without sun recorded at Yeovilton. Most the rainfall in the south-west is caused by Atlantic depressions or by convection. Most of the rainfall in autumn and winter is caused by the Atlantic depressions, which is when they are most active. In summer, a large proportion of the rainfall is caused by sun heating the ground leading to convection and to showers and thunderstorms. Average rainfall is around 700 mm (28 in). About 8–15 days of snowfall is typical. November to March have the highest mean wind speeds, and June to August have the lightest winds. The predominant wind direction is from the south-west.

Crewkerne railway station is served by South West Trains on the main south western railway line. Trains operate to London Waterloo (two and a half hours away) via Salisbury (70 minutes), and in the opposite direction to Exeter St Davids (under an hour). The station was opened by the London and South Western Railway on 19 July 1860. It was designed by Sir William Tite and has been designated as a Grade II listed building.

The town is served by Stagecoach South West with buses to Yeovil via Kithill, Misterton and Haselbury Plucknett and Chard. Buses also run to Merriott, South Petherton and Ilminster and Taunton. First Somerset & Avon has service to Bridport via Beaminster and Broadwindsor, Yeovil via East Chinnock and West Coker and Chard.

It is on the route of the Monarch's Way a 615-mile (990 km) long-distance footpath in England that approximates the escape route taken by King Charles II in 1651 after being defeated in the Battle of Worcester. 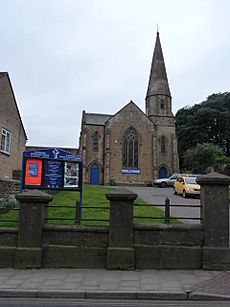 St Bartholomew's Parish Church stands on high ground to the west of the town. The first Saxon church was founded before the end of the 9th century as a "minster", or main church of a Saxon royal estate that included an area which later became the parishes of Seaborough, Wayford and Misterton. This church was replaced after the Norman Conquest with a larger stone cruciform building, with a central tower. This was almost completely rebuilt and enlarged in the late 15th and early 16th centuries. This is, for the most part, the church building visible today. It is an excellent example of the Perpendicular style with many unusual and individual features. These include the west front, the nave, the six-light aisle windows and the Tudor-style chapels and windows in the north east corner. The building material is golden-coloured Ham Hill stone, quarried nearby. There is a notable pair of 'green man' carvings within the church.

No major alterations have been made since the Reformation in the 1530s and 1540s, but there have been many changes to the interior to accommodate various phases of Church of England worship. Among these are an oven used for baking communion bread in the south east corner of the north chapel. During the Civil War, considerable damage was done including the destruction of nearly all of the medieval stained glass. William III of England worshipped in the church following his landing in the Glorious Revolution of 1689. By the early 19th century, all the medieval furnishings, except the Norman font had disappeared. New pews were made and the west galleries were added in 1808-11. The latest restoration that has left the church interior visible today, took place in the late 19th century; it was more sympathetic to the church's architectural character than many Victorian restorations. At this time, the central section of the west gallery was removed to reveal the great west window and the organ was relocated to the south transept. The pews date from around 1900 and have attractive carved bench-ends. The church has been designated by English Heritage as a Grade I listed building.

Crewkerne also contains one of very few Unitarian chapels left in the West Country, Crewkerne Unitarian Church, a tiny chapel tucked away on Hermitage Street. The Methodist church on South Street is shared by Roman Catholic and Methodist congregations, following the closure and proposed redevelopment of St Peter's Catholic Church.

Crewkerne and District Museum is part of a wider heritage centre which includes local archives and a meeting room. The museum opened in 2000 in an old house with an 18th-century frontage. It was restored with the help of grants from the Heritage Lottery Fund, Somerset County Council, South Somerset District Council and Crewkerne Town Council. The development of Crewkerne during the 18th and 19th centuries, with particular emphasis on the flax and linen industry is illustrated with a permanent display. Other collections relate to local archaeology, Coins and Medals, Costume and Textiles, Fine Art, Music, Personalities, Science and Technology, Social History, Weapons and War.

Crewkerne is twinned with Igny, Essonne and Bures-sur-Yvette in France.

All content from Kiddle encyclopedia articles (including the article images and facts) can be freely used under Attribution-ShareAlike license, unless stated otherwise. Cite this article:
Crewkerne Facts for Kids. Kiddle Encyclopedia.