Pisonia brunoniana is a species of flowering tree in the family Nyctaginaceae that is native to New Zealand, Norfolk Island, Lord Howe Island and Hawaiʻi. The common names in New Zealand are parapara or birdcatcher tree.

Pisonia brunoniana is a small tree, spreading to 6 metres (20 ft) or more tall. The wood is soft and the branches are brittle. The large leaves are opposite or ternate, glabrous, and glossy, entire (simple with smooth margins), and obtuse to rounded at apex. The inflorescence is paniculate, many-flowered, and the flowers are unisexual. The very sticky fruits, in which small birds are often trapped, are narrowly ellipsoidal, and 2–3 centimetres (0.79–1.18 in) long, having five ribs.

In the Seychelles, the sticky seeds of a related species, Pisonia grandis, regularly causes seabird deaths, and research suggests that the seeds evolved to be transferred on the plumage of seabirds to distant islands, enabling the long-distance dispersal of the species. The situation may be similar with P. brunoniana. 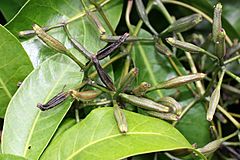 The seeds of P. brunoniana turn black and sticky as they ripen

In New Zealand, Pisonia brunoniana grows in coastal forest on Raoul Island in the Kermadec group, on the Three Kings Islands, and in the North Island in scattered locations from Whangape Harbour to Mangawhai. Historically, it grew near Auckland, on the Coromandel Peninsula and at East Cape. It is now mainly found on offshore islands, especially rodent-free islands, where it often forms an important understorey component of mixed-broadleaf forest.

The plant is almost extinct in the North Island, partly because the large leaves of P. brunoniana are eagerly eaten by browsing animals such as possums, goats and feral cattle.

The plant is reasonably common in cultivation as a decorative tree in New Zealand, especially in the northern North Island. Two variegated cultivars are sold as P. brunoniana in New Zealand nurseries, although one of these, which has leaves extensively marbled with white, may in fact be P. umbellifera, a similar species which occurs throughout the tropical Indo-Pacific.

In Hawaiʻi, where it is known as pāpala kēpau, P. brunoniana is most common in dry to mesic habitats. Although abundant in certain locations, such as Kīpuka Puaulu, it has a relatively restricted distribution compared to the related species P. sandwicensis and P. umbellifera. The sticky fruits were employed by the Hawaiian kia manu (bird catchers) to trap birds in order to collect feathers for capes and other objects.

All content from Kiddle encyclopedia articles (including the article images and facts) can be freely used under Attribution-ShareAlike license, unless stated otherwise. Cite this article:
Pisonia brunoniana Facts for Kids. Kiddle Encyclopedia.