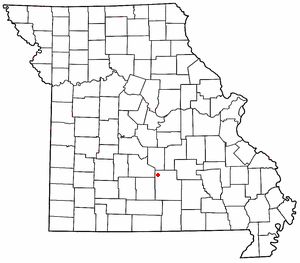 Plato is an incorporated village in northwestern Texas County, Missouri, United States. It is located about 20 miles northwest of Houston, Missouri and 10 miles south of Fort Leonard Wood on Route 32. The population was 109 at the 2010 census.

As of the 2010 U.S. Census Plato is the Mean center of United States population of the distribution of the U.S. population.

The community was founded in 1874 and is named after the ancient Greek philosopher Plato.

The Bates-Geers House was listed on the National Register of Historic Places in 1982.

According to the United States Census Bureau, the village has a total area of 0.38 square miles (0.98 km2), all of it land.

There were 41 households of which 36.6% had children under the age of 18 living with them, 65.9% were married couples living together, 12.2% had a female householder with no husband present, 7.3% had a male householder with no wife present, and 14.6% were non-families. 14.6% of all households were made up of individuals and 9.8% had someone living alone who was 65 years of age or older. The average household size was 2.66 and the average family size was 2.83.

Mean center of the United States

In March 2011 Plato was declared the 2010 Mean center of United States population based on 2010 Census data.

The report of Plato as being the mean center was first reported on the Wikipedia mean center page in December 21, 2010 – nearly 3 months before the census officially declared it. The report got quite wide coverage after being reported in the Houston, Missouri Herald article and a Connecticut Public Radio broadcast. Reports subsequently said that Alex Zakrewsky, a planner from Middlesex County, New Jersey claimed to have been the source for the Wikipedia article. Zakrewsky said he had plugged the 2010 numbers into a spreadsheet he developed using year 2000 data to calculate the center. He said that a colleague posted it to Wikipedia. His calculation placed it to the west of the community on Robidoux Creek, 3.2 miles off the official Census report which placed it on the east side of the community (37°31′03″N 92°10′23″W﻿ / ﻿37.517534°N 92.173096°W﻿ / 37.517534; -92.173096).

The mean center has been moving southwest through Missouri about 20 to 30 miles per decade since 1980 when it was near DeSoto, Missouri. In 2000 it was near Edgar Springs, Missouri.

Waynesville Regional Airport at Forney Field serves the community with air service. Even though it's on Fort Leonard Wood, it is jointly run by the cities of Waynesville and St. Robert and is available for civilian use by private pilots and scheduled commercial passenger service.

All content from Kiddle encyclopedia articles (including the article images and facts) can be freely used under Attribution-ShareAlike license, unless stated otherwise. Cite this article:
Plato, Missouri Facts for Kids. Kiddle Encyclopedia.