Poestenkill is a town in Rensselaer County, New York, United States. The population was 4,530 at the 2010 census. The town is named after the Poesten Kill, an important stream in the area. The words poesten kil (with only one l) are traditionally supposed to signify "foaming water" or "foaming creek" in Dutch. While kil indeed means "water" or "creek" in Dutch, Dutch dictionaries do not support the claim of poest as "foam". It seems more likely that the creek was named after the nickname Poest for the 17th-century local farmer and miller Jan Barentsen Wemp, who had a pimple (poest) or had difficulty breathing (poesten = to breathe); he owned a farm and a mill on the Poestenkil creek. Among the earliest settlers in the town was Archelaus Lynd. He leased 300 acres of land from the Van Rensselaers and made his first clearing in the area of Hillside Cemetery, which was known as The Lynd Cemetery until about 1900. The Whyland and Ives families were other early settlers. The town is southeast of Troy and is centrally located in the county.

The area was first settled around 1770, and the town of Poestenkill was created from part of the Town of Sand Lake on March 2, 1848.

When the American Revolutionary War broke out, six men served from the area. One, named Benjamin Cotterel, is said to have carried the first wheelbarrow of earth to Bunker Hill.

The first school in the area was established in or soon after 1788 on land set aside for that purpose by Stephen Van Rensselaer III. Five men from Poestenkill served in the War of 1812, all joining the Eddy expedition.

The first regular church in Poestenkill was the First Baptist church, organized in 1814 and located in East Poestenkill.

Future president James A. Garfield considered a job as high school principal in Poestenkill in 1856, though lost it to another applicant.

Poestenkill celebrated its sesquicentennial (150th anniversary) in 1998, with several events including a Revolutionary War reenactment, antique car show, a parade, and a historical display. A postcard was also produced for the town at the time.

The eastern and central portions of the town are part of the Rensselaer Plateau. 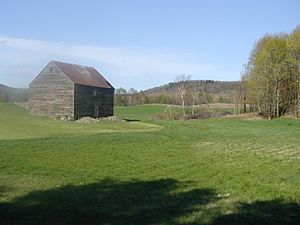 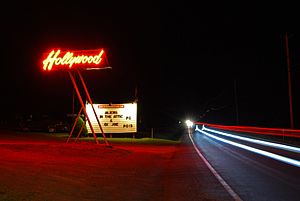 Hollywood Drive In on Route 66

There were 1,527 households out of which 36.4% had children under the age of 18 living with them, 61.6% were married couples living together, 9.0% had a female householder with no husband present, and 25.5% were non-families. 20.0% of all households were made up of individuals and 7.6% had someone living alone who was 65 years of age or older. The average household size was 2.64 and the average family size was 3.07.

Communities and locations in Poestenkill

All content from Kiddle encyclopedia articles (including the article images and facts) can be freely used under Attribution-ShareAlike license, unless stated otherwise. Cite this article:
Poestenkill, New York Facts for Kids. Kiddle Encyclopedia.