Kids Encyclopedia Facts
Not to be confused with Ballantrae.

Portballintrae (from Irish: Port Bhaile an Trá, meaning "port of the beach settlement") is a small seaside village in County Antrim, Northern Ireland. It is four miles east of Portrush and two miles west of the Giant's Causeway. In the 2001 Census it had a population of 734 people, a decline of 10% compared to 1991. It lies within the Causeway Coast and Glens District Council area. 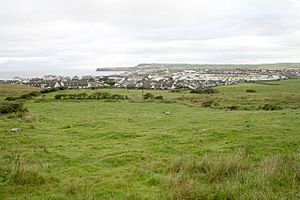 Portballintrae from the A2 road to Bushmills.

Portballintrae was originally a fishing village; a cluster of whitewashed cottages nestled around the horse shoe-shaped Ballintrae Bay. Many of its earlier buildings have been restored and maintained. The original village houses were built in a line along the seashore and many old cottages still stand on the shore. Portballintrae has undergone rapid growth since the 1970s. However, there has been a steady change in its character, with almost all the recent dwellings completed acquired as second homes, and a considerable proportion of the older housing changing also to second homes. Considerably less than half of the dwellings in the village remain as permanent residences. House prices are high; a modest three bedroom bungalow would be expected to realise anything up to £300,000, those with sea views realise considerably more than this. In the summer of 2009, a new village hall was constructed by the seafront car park, complete with conference suite, IT facilities, and a newsagents.

In 2007 Portballintrae was considered as a location for a proposed £1 billion golf course complex by American tycoon and future American president Donald Trump.

Off the coast of Portballintrae a team of Belgian divers brought up the greatest find of Spanish Armada treasure ever recovered from a wrecked ship. The Girona's recovered gold jewellery is on show in the Ulster Museum, Belfast. 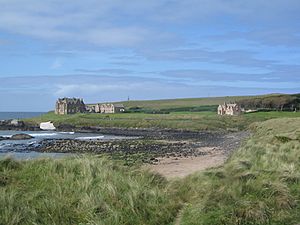 Runkerry House as it stands today

Portballintrae is classified as a small village or hamlet by the NI Statistics and Research Agency (NISRA) (i.e. with population between 500 and 1,000 people). On Census day (29 April 2001) there were 734 people living in Portballintrae. Of these:

All content from Kiddle encyclopedia articles (including the article images and facts) can be freely used under Attribution-ShareAlike license, unless stated otherwise. Cite this article:
Portballintrae Facts for Kids. Kiddle Encyclopedia.