Porthleven (/ˌpɔːrθˈlɛvən/) is a town, civil parish and fishing port near Helston in Cornwall, United Kingdom. It is the most southerly port on the island of Great Britain, and was originally developed as a harbour of refuge, when this part of the Cornish coastline was recognised as a black spot for wrecks in days of sail. Nearby Loe Bar was particularly infamous, with swimmers and surfers being warned off the area to this day. Porthleven has many large areas of social and council housing. An electoral ward called Porthleven and Helston South also exists. The population at the 2011 census was 3,059.

Discover Porthleven – an online museum – was created in 2015 as an ongoing community project. Its aim is to record all Porthleven's history. Large amounts of images and text are being received from around the world as well as from local residents. Once up to date it is hoped to start recording history in the making as tomorrow makes today history. The museum also has a large pictorial display at Out of the Blue Porthleven.

An index of archives can be accessed on the home page. Everything is being created in volumes of e-books. Individuals can create their own log in details and submit their own history.

Historically and for local government purposes, Porthleven was included within the town boundaries of nearby Helston. After years of growth, it now has its own town council. Its population recorded by the United Kingdom Census 2001 was 3,190. Including tourists and surfers would swell that number considerably.

Until 1844 Porthleven was within the parish of Sithney; the parish church of St Bartholomew was built in 1842. The name Porthleven is probably connected with St Elwen or Elwyn, whose chapel here existed before 1270. It was rebuilt c. 1510 but was destroyed in 1549. There were also chapels at Higher Penrose and Lanner Veor (the latter founded in 1377) and a holy well at Venton-Vedna.

Porthleven has exploited its location and exposure to powerful swells to become one of the best-known and highly regarded surfing spots in Britain. Waves, often exceeding 6.6 feet (2.0 m), break on the shallow reef that was shaped by blasting the harbour. Due to the prevailing westerly winds it was very easy for a ship under sail to get trapped in the bay and be cast up on the rocks at the small fishing coves of Mullion, Kynance and the Lizard.

Porthleven's most recognisable building is the Bickford-Smith Institute next to the pier and harbour entrance. With a tower about 70 feet (20 metres) high, it looks like a church but currently is used as a snooker club and houses the town council offices. It featured (along with various other scenes from the town) as the incident room in an episode of the TV detective series Wycliffe. A picture of the building against a large breaking wave sometimes appears in the background of BBC UK weather forecasts, particularly when windy conditions and rough seas are expected.

The Royal National Lifeboat Institution stationed a lifeboat at Porthleven in 1863. A boat house was built at Breageside from where the boat was taken to the water on a carriage. A new boat house on the west side of the harbour entrance was opened in 1894 with a slipway to make launching easier. The station was closed in 1929 as the neighbouring stations at The Lizard and Penlee had been equipped with motor lifeboats that could cover the whole of Mount's Bay. The slipway was dismantled and the boat house was used as a store for a while but has since become the Shipwreck Centre museum.

Porthleven lies within the Cornwall Area of Outstanding Natural Beauty (AONB). Almost a third of Cornwall has AONB designation, with the same status and protection as a National Park.

There are four Sites of Special Scientific Interest (SSSI) sites close to Porthleven. Three of them, Porthleven Cliffs SSSI, Porthleven Cliffs East SSSI and Wheal Penrose SSSI are also Geological Conservation Review (GCR) sites. The ″Giant’s Rock″, within Porthleven Cliffs SSSI, is an erratic of unknown origin and unknown mode of transport to its present site near the entrance of Porthleven harbour. The Wheal Penrose SSSI is a disused lead mine 550 yards (500 m) to the south with "good examples of typical lead zone mineralisation". The fourth Loe Pool SSSI is Cornwall's largest natural lake formed by a barrier beach, known as Loe Bar, which dams the River Cober.

Methleigh was the site of a fair and annual market from the year 1066.

After the Norman Conquest the Bishop of Exeter held the manor of Methleigh but the Earl of Cornwall possessed the fair. At the time of the Domesday Survey there were 15 acres (6.1 ha) of arable land, 40 acres (16 ha) of pasture and 60 acres (24 ha) of underwood. The population consisted of 15 villeins, 4 smallholders and 3 serfs.

Porthleven beach lies to the east of the town adjacent to the harbour and near Porthleven village centre. RNLI lifeguards patrol it during the holiday season. The beach is separated from the harbour by a granite pier, which stands in front of the Porthleven institute and clock tower. When the tide is out it is possible to walk in an easterly direction along Porthleven beach for approximately three miles. There is also a coastal path with views of the beach below.

Surfing is very popular at Porthleven and nearby Praa Sands. Porthleven has been described as "Cornwall's best reefbreak". Kayaking is also popular due to the slipway from within the harbour and access via surrounding beaches.

Porthleven Bowling Club is based at Gala Park, Methleigh Parc in Helston. It is affiliated to Bowls Cornwall and Bowls England. The club was founded in 1959 and has lawn bowling and short-mat bowls facilities. There are in-house competitions for men and women. The club competes against other clubs and individuals within West Cornwall, Cornwall and nationally. The website is www.porthlevenbowlingclub.co.uk

Porthleven has a Non-League football club Porthleven F.C. who play at Gala Parc

The restaurateur Rick Stein has a restaurant in the town. 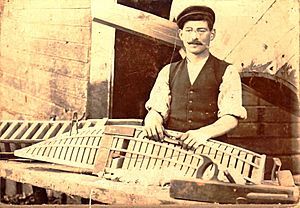 All content from Kiddle encyclopedia articles (including the article images and facts) can be freely used under Attribution-ShareAlike license, unless stated otherwise. Cite this article:
Porthleven Facts for Kids. Kiddle Encyclopedia.