Poundbury is an experimental new town or urban extension on the outskirts of Dorchester in the county of Dorset, England.

The development is built on land owned by the Duchy of Cornwall. It is built according to the principles of Prince Charles, who is known for holding strong views challenging the post-war trends in town planning that were suburban in character.

The development is built to a traditional high-density urban pattern, rather than a suburban one, focused on creating an integrated community of shops, businesses, and private and social housing. There is no zoning. The planners say they are designing the development around people rather than the car, and they aim to provide a high-quality environment, from the architecture to the selection of materials, to the signposts, and the landscaping. To avoid constant construction, utilities are buried in common utility ducts under the town. Common areas are maintained by a management company to which all residents belong. It consists of 40% social housing and is designed for sustainable development, which includes being carbon-neutral.

To some degree, the project shows similarities with the contemporary New Urbanism movement, except that the design influences are European. The design of the houses are in traditional and new classical styles, with period features such as bricked-up windows, a feature found on many old British buildings, due to the window tax.

Poundbury's aesthetics have been criticized by several commentators. Architecture writer Jonathan Meades labelled the town a "cottagey slum" and a "Thomas Hardy theme-park for slow learners". ARCHITECT magazine's Witold Rybczynski, however, says that "Poundbury embodies social, economic, and planning innovations that can only be called radical." 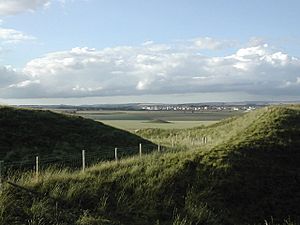 Poundbury as seen from Maiden Castle

The overall plan was developed in the late 1980s by the Luxembourgian architect Leon Krier, and construction started in October 1993. Krier's plans have been criticised for mixing too many different continental styles and the use of non-local building materials, which are not consistent with the traditions of Dorchester. It is expected that the four plan phases will be developed over 25 years with a total of 2,500 dwellings and a population of approximately 6,000.

Greetings card entrepreneur Andrew Brownsword sponsored the £1 million development of the market hall at Poundbury, designed by John Simpson and based on early designs, particularly the one in Tetbury.

Following New Urbanist principles, Poundbury was intended to reduce car dependency and encourage walking, cycling, and public transport. A survey conducted at the end of the first phase, however, showed that car use was higher in Poundbury than in the surrounding (rural) district of West Dorset. Nonetheless, the community is receiving positive recognition from New Urbanist publications such as Better Cities and Towns.

All content from Kiddle encyclopedia articles (including the article images and facts) can be freely used under Attribution-ShareAlike license, unless stated otherwise. Cite this article:
Poundbury Facts for Kids. Kiddle Encyclopedia.