Kids Encyclopedia Facts
Not to be confused with Frederick, Maryland.

The climate in this area is characterized by hot, humid summers and generally mild to cool winters. According to the Köppen Climate Classification system, Prince Frederick has a humid subtropical climate, abbreviated "Cfa" on climate maps.

There were 583 households, out of which 25.9% had children under the age of 18 living with them, 29.2% were married couples living together, 17.3% had a female householder with no husband present, and 48.0% were non-families. 43.6% of all households were made up of individuals, and 24.7% had someone living alone who was 65 years of age or older. The average household size was 2.14 and the average family size was 2.96. 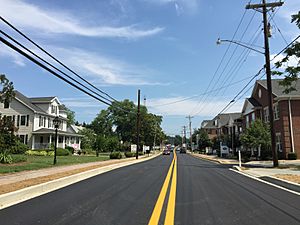 Prince Frederick has served as the county seat of Calvert County since 1722, when officials chose a plot of land known as "Williams' Old Field" as the spot for the new county courthouse. (Contemporary references to the piece of land include an upscale dining restaurant named Old Field Inn, and a street in Prince Frederick named "Old Field Lane.") The original courthouse was finally completed in 1732. The town was most likely named for George II's son Frederick, who was Prince of Wales during the time of the town's original conception.

In the War of 1812, Commodore Joshua Barney's Chesapeake Bay Flotilla found refuge from the advancing British in St. Leonard's Creek, several miles south of Prince Frederick, in June 1814. While laying siege to Barney's force, the British under the command of Admiral Sir Alexander Cochrane plundered and destroyed the area nearby, including burning the town of Prince Frederick.

In 1882, Prince Frederick burned a second time, when a massive fire destroyed virtually the entire town and its courthouse. A new courthouse was erected on the same spot, and remains the center of Calvert County's government to this day.

In the 1960s, Albert Irvin Cassell, a prominent mid-twentieth-century African-American architect in Washington, D.C.,sought to develop Chesapeake Heights on the Bay, a 520-acre (2.1 km2) summer resort community for African-Americans. The project was to feature houses, a motel, shopping centers, a pier, a marina, beaches, and a clubhouse fronting the Chesapeake Bay. Roads and a few homes were built by 1969, but the project ended with Cassell's death in that same year.

In 1984, Prince Frederick was named one of seven "town centers" by Calvert County's government. The town center designation meant that while Prince Frederick was still not formally incorporated, special zoning regulations would be enacted and boundaries would be established so new growth would be centered around the existing commercial and residential districts. This was done in order to take advantage of existing infrastructure and discourage poorly planned urban sprawl. Prince Frederick's town center status also meant the creation of special architectural review boards who would encourage theme and unity of new buildings built within the town center.

Linden was listed on the National Register of Historic Places in 2000.

Solomons Island Road is the major north-south artery through Prince Frederick and carries two Maryland Route designations: Maryland Route 2, which runs from Baltimore to Solomons, and Maryland Route 4, an extension of Pennsylvania Avenue from Washington, D.C., which continues past Solomons over the Governor Thomas Johnson Bridge across the Patuxent River to St. Mary's County. Route 4 was dualized in the mid-1970s, and commuter buses run on it to Washington. Routes 2 and 4 join north of Prince Frederick near Sunderland. Route 2 from there north is only a two-lane road to Annapolis.

In 2009, a portion of Route 2-4 in Prince Frederick was widened to three lanes in each direction.

In the mid-1990s, a series of new loop roads and side streets were approved in Prince Frederick in order to divert local traffic off Route 2-4 and alleviate thru-traffic congestion. The first of these roads, Prince Frederick Boulevard, has been completed between Maryland Route 231 and Stoakley Road. A second portion of the road, Chesapeake Boulevard, opened in 2010 on the eastern side of Route 2-4 and provides access to the new Calvert Middle School. Additional roads are planned around the southern portions of town.

Best-selling author Tom Clancy operated an insurance business in Prince Frederick prior to his literary career and was an active parishioner of St. John Vianney Catholic Church, and still owned a home near Prince Frederick on Chesapeake Bay until his death in 2013.

While on the faculty of Chesapeake Biological Laboratory in nearby Solomons, noted theoretical ecologist Dr. Robert Ulanowicz resided near Prince Frederick prior to his retirement in 2008.

All content from Kiddle encyclopedia articles (including the article images and facts) can be freely used under Attribution-ShareAlike license, unless stated otherwise. Cite this article:
Prince Frederick, Maryland Facts for Kids. Kiddle Encyclopedia.