Kids Encyclopedia Facts
This page is about the village in England. For other uses, see Princetown (disambiguation).

Princetown is a village in the Dartmoor national park in the English county of Devon. It is the principal settlement of the civil parish of Dartmoor Forest.

The village has its origins in 1785, when Sir Thomas Tyrwhitt, Secretary to the Prince of Wales, leased a large area of moorland from the Duchy of Cornwall estate, hoping to convert it into good farmland. He encouraged people to live in the area and suggested that a prison be built there. He called the settlement Princetown after the Prince of Wales.

In 1780, a farm was reclaimed on the site of an ancient tenement near the Two Bridges, and in 1785, Sir Thomas Tyrwhitt set about improving the moor at a place which he named Tor Royal (present day Tor Royal Farm), about 1 km (0.6 mi) south-east of Princetown. He made an estate and built a house in 1798. Later the road from Tavistock to Princetown was built, as well as the other roads that now cross the moor. 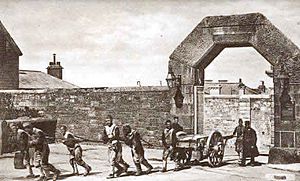 He also proposed that a prison be built on Dartmoor to house the thousands of captives of the Napoleonic Wars and the later War of 1812, who had become too numerous to lodge in the prisons and prison-ships at Plymouth. The site was given by the Prince of Wales, who held the lands of the Duchy of Cornwall to which the whole moor belonged. This is why the settlement is named Princetown. Dartmoor Prison was built in 1806 at a cost of £130,000. At one time it had a capacity of between 7,000 and 9,000 prisoners.

A small town grew up near the prison. Two large inns were built during the war. Many of the prisoners had prize money to come from their own country; many others made their own money in their hammocks at night, even forging Bank of England and local bank notes, which they passed off in the great daily market held in the prison. With the closing of the prison in 1816, the town almost collapsed, but the completion of the Dartmoor Railway in 1823 brought back many people to the granite quarries. The prison remained derelict until 1851, when it was reopened for prisoners serving long sentences. It has since been considerably extended. 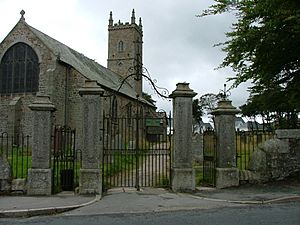 The village is located on the B3212 road between Yelverton and Two Bridges and is surrounded by moorland. Several footpaths across the moor pass through the village, including one leading west to Sampford Spiney and one leading south to Nun's Cross and Erme Head.

Tor Royal Lane is a dead end road which leads down from the village to the site of the disused Whiteworks tin mine, about 2 miles or 3 km to the south-east, which overlooks Fox Tor Mires, the presumed site of the Grimpen Mire to be found in Arthur Conan Doyle's tale The Hound of the Baskervilles. Conan Doyle stayed at the former Duchy Hotel whilst writing and researching the story with his friend, Bertram Fletcher Robinson. The hotel has long since closed and the building now houses the National Park Visitor Centre which is an all-weather centre and activity hub, with interactive displays, films, inspiring exhibitions and a children's discovery area.

Other points of interest in the village include the prison museum and the churchyard which includes the graves of French and American prisoners of war who were housed in the prison. The Church of St Michael has the distinction of being the only one in England constructed by POWs and is dedicated, as are many churches in high locations

The village is overlooked from the north-west by North Hessary Tor upon which is a tall transmitting mast that provides a useful guide point for walkers from miles around.

The village is mainly made up of white British people living in a mix of social and private housing. There are currently 74 children enrolled at the primary school and a further 17 at the pre-school, which is contained within the Community Centre in its own purpose-built wing. Most people living in Princetown commute to work in Plymouth or Tavistock, but with the expansion of the brewery more jobs have been created locally. The population is projected to keep increasing in the future mainly due to the improved amenities within the village itself and the relatively high percentage of young people living there. Princetown is undergoing significant regeneration and expansion, with new private housing being built at several sites in the village and a football pitch being built behind the Community Centre. High Moorland Visitor Centre has been renamed as the National Park Visitor Centre, and the area outside the centre altered to include artwork and new seating areas.

Princetown, like the rest of Dartmoor, experiences colder and wetter weather than most of Devon, especially because of its high altitude. Snow is uncommon but is usually heavy when it does fall.

A summer bus service, the Transmoor link (no. 82 bus) between Plymouth and Exeter, passes through the village and there is a daytime service linking Princetown to Yelverton and Tavistock. The Transmoor link operates in the winter, but only on Sundays.

All content from Kiddle encyclopedia articles (including the article images and facts) can be freely used under Attribution-ShareAlike license, unless stated otherwise. Cite this article:
Princetown Facts for Kids. Kiddle Encyclopedia.