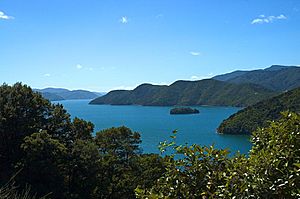 Queen Charlotte Sound / Tōtaranui is the easternmost of the main sounds of the Marlborough Sounds, in New Zealand's South Island. It is, like the other sounds, a drowned river valley (or ria), and like the majority of its neighbours it runs southwest to northeast before joining Cook Strait.

The town of Picton, the northern terminus of the South Island's railway and state highway networks, lies near the head of the Sound. Other settlements by the sound are small and isolated—often simply individual properties. Due to the rugged nature of the coast, for many of these access is by boat only.

To the east of the sound lie Arapaoa Island and Tory Channel. Interisland ferries use Tory Channel and Queen Charlotte Sound on their journeys between Picton and Wellington in the North Island.

Parallel to Queen Charlotte Sound to the northwest lies Kenepuru Sound, an arm of Pelorus Sound, Marlborough's other main sound. Some of the small side arms of the two sounds are only hundreds of metres apart, but are separated by a steep serrated range of hills. Not surprisingly, one of the settlements on this stretch of coast is called Portage, named for the simplest method of passing between the two sounds.

It was from a hill on Arapaoa Island in 1770 that Captain James Cook first saw the sea passage from the Pacific Ocean to the Tasman Sea, which was named Cook Strait. Captain Cook sheltered in Queen Charlotte Sound during each of his three voyages of exploration at various points.

The area was a base for whaling throughout the 19th and early 20th centuries, notably at Perano Head on Arapaoa Island.

Queen Charlotte Sound has calm water and is popular for sailing - a marked contrast to the notorious waters of Cook Strait. Many ships have been wrecked close to the entrance to the Sound, most notably in recent years the Russian cruise liner Mikhail Lermontov, which sank in 1986 in Port Gore after striking rocks. One life was lost in the incident.

In August 2014, the name of the sound was officially altered to Queen Charlotte Sound / Tōtaranui.

All content from Kiddle encyclopedia articles (including the article images and facts) can be freely used under Attribution-ShareAlike license, unless stated otherwise. Cite this article:
Queen Charlotte Sound (New Zealand) Facts for Kids. Kiddle Encyclopedia.