Rainbow Stage is Canada's largest and longest-running outdoor theatre, located in Kildonan Park in north Winnipeg, Manitoba. The covered, open-air theatre seats up to 2,600 people and operates from May to September. 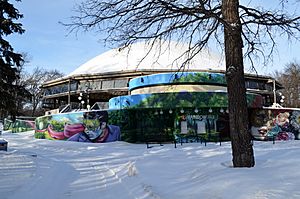 In 1950, Oliver M. "Hap" Day (President of the Civic Music League) was interviewed by newspaper columnist Frank Morris, and was asked about a summer venue for the Winnipeg Musician's Association's Brass and Concert Bands. Due to severe flooding, the bandstands at Assiniboine Park and Kildonan Park were unsuitable. The newspaper column that Morris produced featured a picture of Day and called for the construction of an outdoor stage in Winnipeg. The Winnipeg Summer Theatre Association was founded in 1956 to administer the theatre. In 1966 the non-profit organization Rainbow Stage Inc was chartered, with Jack Shapira as executive producer.

The 3,000-seat outdoor stage was designed by architects Smith, Carter, Katelnikoff. The name of theatre was suggested by the cardboard model of the design Dennis Carter brought with him to a meeting one night, someone having observed that if lights were strung along the top curvature, "it would look like a rainbow." Construction began in 1951 and was completed in 1952. Additional work on the amphitheatre was completed in 1953. The first concert was performed by the touring Kitsilano Boys Band from Vancouver on 22 September 1953. In 1954, pergola walkways were constructed on either side of the amphitheatre. The official opening of the stage was on 7 July 1954 and featured a benefit concert. During 1954, the stage saw 19 performances to a combined audience of more than 19,000.

A triodetic dome, costing $175,000, was constructed over the theatre in 1970. Further renovations were completed in 1975, which resulted in a modernized facility but a reduction of 600 seats. The renovations involved a labour dispute and a temporary move to the Manitoba Centennial Concert Hall. In 1986, a fly gallery, carpentry and paint shops, classrooms and expanded change rooms were added to the facility. The 1986 renovation involved replacing an original timber arch. A commemorative plaque and a replica of the arch were erected in front of the building in 1988.

Jack Shapira was maintained as executive producer of Rainbow Stage Inc until he was forced to resign in 1988 as a result of financial improprieties. Jerrett Enns became general manager in 1991.

The first original production at Rainbow Stage came in 1990 with the musical review Say It With Music. The performance featured songs from various musicals.

In 2011, the building's exterior was painted in an extensive mural by local artists Mandy Van Leeuwen and Michel Saint Hilaire. Painting began June 1 and the finished murals were unveiled in August. The mural covers 8,000 square feet (740 m2) of concrete and required 400 colours of latex paint.

In 2012, the theatre appointed Ray Hogg as Artistic Director and promoted Julie Eccles to Executive Director. After a successful and critically acclaimed 2013 season, 2014 saw the summer playbill feature three shows for the first time in over 30 years.

Rainbow Stage has presented the following shows in its history: 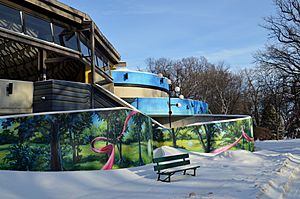 All content from Kiddle encyclopedia articles (including the article images and facts) can be freely used under Attribution-ShareAlike license, unless stated otherwise. Cite this article:
Rainbow Stage Facts for Kids. Kiddle Encyclopedia.