Ramanathapuram District is an administrative district of Tamil Nadu state in southern India. The town of Ramanathapuram is the district headquarters. Ramanthapuram District has an area of 4123 km2. It is bounded on the north by Sivaganga District, on the northeast by Pudukkottai District, on the east by the Palk Strait, on the south by the Gulf of Mannar, on the west by Thoothukudi District, and on the northwest by Virudhunagar District. The district contains the Pamban Bridge, an east-west chain of low islands and shallow reefs that extend between India and the island nation of Sri Lanka, and separate the Palk Strait from the Gulf of Mannar. The Palk Strait is navigable only by shallow-draft vessels. It also contains Theriruveli, a small village. As of 2011, Ramanathapuram district had a population of 1,353,445 with a sex-ratio of 983 females for every 1,000 males. 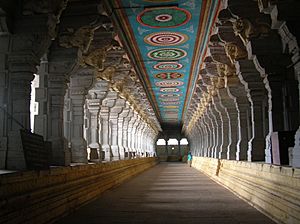 Corridors of the Rameshwaram temple

In the early 15th century, the present territories of Ramanathapuram district, comprising taluks Tiruvadanai, RajaSingaMangalam, Paramakudi,Ramanathapuram and Rameswaram, Kamuthi, Mudukulathur in Pandyan Dynasty. For a short period, this area was under the Kings when Rajendra Chola I brought it under his territory in 1063 AD. In 1520 AD, the Nayaks of Vijayangar took over the area under their control from the Pandiyan dynasty for about two centuries, Marava chieftains-Sethupathis who were Lords under Pandiyan Kings and reigned over this part (17th century). At the beginning of the 18th century, family disputes over succession resulted in the division of Ramanathapuram. With the help of the King of Thanjavur in 1730 AD, one of the chieftains deposed Sethupathy and became the Raja of Sivaganga. Acting upon the weakness of the Nayak rules, the local chieftains (Palayakarars) became independent. Raja of Sivagangai and Sethupathy of Ramanathapuram were prominent among them. In 1730, Chand, a Sahib of Carnatic, captured Ramanathapuram. In 1741, the area came under the control of the Marattas and then under the Nizam in 1744 AD, Nawab’s rule made displeasure in the mind of those chieftains. That made them declare the last Nayak as ruler of Pandiya Mandalam against the Nawab in 1752 AD. By that time, throne of Carnatic had two rivals, Shanda Sahib and Mohamed Ali, and this district was part of Carnatic. The British and French supported Chanda Sahib and Mohamed Ali respectively. It paved the way for series of conflicts in the southern part of the continent.

In 1795, the British deposed Muthuramalinga Sethupathy and took control of the administration of Ramanathapuram. In 1801 Mangaleswari Nachiyar was made the Zamindar of Sivagangai. After passing of Queen, the Marudhu Brothers took the charge by paying regular revenue to the East India company. In 1803 the Marudhu Brothers of Sivaganga revolted against the British in collaboration with Kattabomman of Panchalamkurichi. Colonel Agnew captured Marudhu Brothers and hanged them and made Gowri Vallbah Periya Udaya Thevar as Zamindar of Sivaganga. After the fall of Tippu Sultan, British took the control and imprisoned the Nawab. In 1892, the Zamindari system was abolished and a British Collector was appointed for administration. 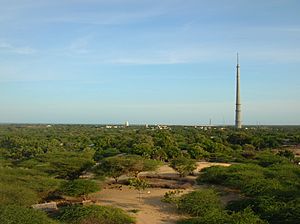 Pamban Island in which Rameswaram located

Most of the area is covered by the unconsolidated sediments of Quaternary age except in the northwestern part, where isolated patches of Archaen Crystallines and Tertiary sandstone are exposed. The Archaeans are mainly represented by the Charnockite Group of rocks comprising garnetiferrous granulite and the Khondalite Group of rocks made up of quartzite of genesses.

Detached exposures of laterite and lateritic soil are seen in the northwestern part of the district.

A major part of the district is covered with the fluvial, fuvio-marine, Aeolian and marine sediments of Quaternary age. The fluvial deposits which are made up of sand, silt and clay in varying degree of admixture occur along the active channels of Vaigai, Gundar, Manimuthar and Pambar rivers. They have been categorised into levee, flood basin, channel bar/ point bar and paleo-channel deposits. The paleo channel deposits comprise brown coloured, fine to medium sands with well preserved cross-beddings. 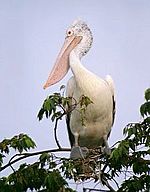 The Aeolian deposits comprise red sands which are in nature of ancient dunes and occur over a 3.2 km wide and 8 km long stretch and lie parallel to the sea coast. These are separated by marshy deposits of black clays. The sands are underlain by calcareous hardpan. In Rameswaram Island also brown sand deposits occur around Sambaimadam on either side of NH 49 west of the town.

Pamban Bridge between Pamban Island and the mainland

All content from Kiddle encyclopedia articles (including the article images and facts) can be freely used under Attribution-ShareAlike license, unless stated otherwise. Cite this article:
Ramanathapuram district Facts for Kids. Kiddle Encyclopedia.