Raron (French: Rarogne) is a municipality in the district of Raron in the canton of Valais in Switzerland.

A settlement on the Heidnischbiel, a burial ground at Blatt and scattered finds in the surrounding vineyards indicate that there was a permanent settlement in the vicinity of Raron from the Neolithic to the La Tène period. The settlement seems to have been abandoned in the Roman era.

During the Middle Ages, the hill west of the Heidnischbiel, was fortified. In the 12th century the Viztum of Raron was established and the Viztume tower house was added to the hill. The tower The families of Raron, Asperlin and de Chevron-Villette all held the office of Vizedominat of Raron as a fief from the Bishop of Sion. During the Raron affair of 1417, the tower was partially destroyed. It was purchased in 1538 by the municipality and then served as city hall and a jail. At the beginning of the 21st Century it was privately owned. In addition, to the Viztume tower, the Meier tower was built in the 13th century. The Meier tower was mostly occupied by the Asperlin family. Raron was important in local politics and held the title Raronia prudens. One bishop and several provincial governors came from Raron.

The center of the local parish was, most likely, originally St. German. The church of St. German existed since about the 8th or 9th centuries. By 1299, the church in Raron had become a parish church. This large parish comprised the four municipalities of the middle third of the Zenden of Raron. In 1554, Unterbäch and Bürchen separated from the parish and in 1867 Ausserberg left as well. The entire Church of St. Romanus, except the tower, was destroyed in 1494 when the Bietschbach flooded. The tower of the church remained until 1938, when it was demolished. The uninhabited Meier tower was converted into a gothic church by Ulrich Ruffiner in 1508–1514. In the early 16th century, this castle church was dedicated to St. Romanus to replace the earlier church. The restored castle church was abandoned in the 1970s and was replaced in 1974 a modern rock church, which was built at the foot of the hill. 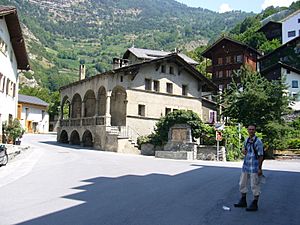 The big stone houses of Raron testify to the prosperity of the 17th and 18th centuries. These historic houses include the Maxenhaus, the Zentriegenhaus, the Zmilacherhaus and houses of the von Roten family as well as the Kalbermatterhaus in Turtig and the tower house in Rotigoblatt. Traffic through Raron over the St. German pass to Visp contributed to the prosperity of the town. However, the construction of the valley road to the left side of the valley in the 19th century, deprived Raron of this source of revenue. Due to the containment of the Rhone and Bietschbach rivers, the draining of the swamps in 1865–1885 and the construction of the Lonza Entsumpfungs canal in 1920, the valley opened up for agriculture.

Raron evolved in the second half of the 20th century into a modern industrial and small business town. Residential and commercial buildings spread out across the valley floor. In the 1940s a military airfield for the Swiss Air Force was built in the valley with an aircraft cavern, but it was abandoned in the army reform of 1994. Air Zermatt established a helicopter base in Raron in 1980. The south portal of the Lötschberg Base Tunnel was opened to the east of the village in 2007. In 2000 more than 60% of the working population worked outside of the municipality, especially in Visp, Brig and Steg.

Raron is known for periodic Passion and Mysteries of the Rosary plays. 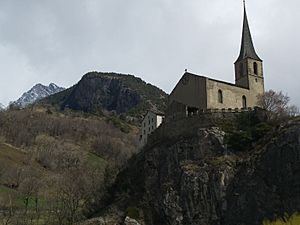 The municipality is the capital of the Westlich Raron district. It includes the villages of Raron and Sankt German and the hamlets of Turtig and Rarnerchumma. It is located on the right side of the Rhone valley at the entrance to the Bietsch valley and west of Visp.

All content from Kiddle encyclopedia articles (including the article images and facts) can be freely used under Attribution-ShareAlike license, unless stated otherwise. Cite this article:
Raron Facts for Kids. Kiddle Encyclopedia.