The razor-backed musk turtle (Sternotherus carinatus) is a species of turtle in the family Kinosternidae. The species is native to the southern United States. There are no subspecies that are recognized as being valid.

S. carinatus is found in the states of Alabama, Arkansas, Louisiana, Mississippi, Oklahoma, Florida, and Texas. 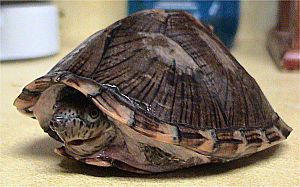 The razor-backed musk turtle grows to a straight carapace length of about 15 cm (5.9 in). It has a brown-colored carapace, with black markings at the edges of each scute. The carapace has a distinct, sharp keel down the center of its length, giving the species its common name.

The body is typically grey-brown in color, with black spotting, as is the head, which tends to have a bulbous shape to it. It has a long neck, short legs, and a sharp beak. Males can usually be distinguished from females by their longer tails.

The plastron is small, with only one hinge which is located anteriorly. There is no gular scute. Barbels are present on the chin only.

S. carinatus is almost entirely aquatic, spending most of its time in shallow, heavily vegetated, slow-moving creeks, ponds, streams, and swamps. The only time it typically ventures onto land is when the female lays eggs. However, both sexes bask often.

The diet of S. carinatus consists primarily of aquatic invertebrates, including freshwater clams, crayfish, snails, and various insects. It also feeds on fish and carrion.

The razor-backed musk turtle is frequently kept in captivity, and is regularly captive bred.Its relatively small size, hardiness and ease of care makes it a more attractive choice as a pet turtle for many keepers, than the more commonly available red-eared slider (Trachemys scripta elegans). There is disagreement in sources how old musk turtles can get in captivity with estimates ranging between 20-50 years.

All content from Kiddle encyclopedia articles (including the article images and facts) can be freely used under Attribution-ShareAlike license, unless stated otherwise. Cite this article:
Razor-backed musk turtle Facts for Kids. Kiddle Encyclopedia.