Dress rehearsal of The Mikado, 1885 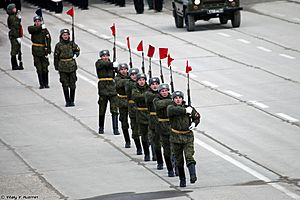 Russian Ground Forces Guards during a dress rehearsal for a military parade in Alabino, Moscow Oblast.

A rehearsal is a practice before a concert or play in a theatre or some other performance. The group of performers will get together to rehearse. They may rehearse together many times before the performance so that they get used to performing with one another.

A technical rehearsal in a theatre is a rehearsal for practising things such as lighting and using props.

All content from Kiddle encyclopedia articles (including the article images and facts) can be freely used under Attribution-ShareAlike license, unless stated otherwise. Cite this article:
Rehearsal Facts for Kids. Kiddle Encyclopedia.