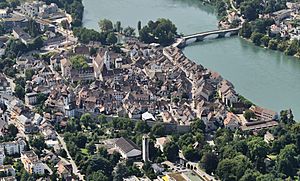 Aerial view at the historic centre 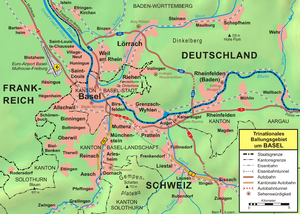 Rheinfelden, shown to the right of Greater Basel 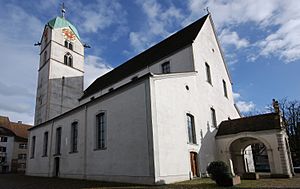 Rheinfelden is a city and municipality of the canton of Aargau in Switzerland, seat of the district of Rheinfelden. It is 15 kilometres (9.3 mi) east of Basel. The name means the fields of the Rhine, as the town is on the Hochrhein. It is home to Feldschlösschen, the most popular beer in Switzerland. The city is across the river from Rheinfelden in Baden-Württemberg; the two cities were joined until Napoleon Bonaparte fixed the German–Swiss border on the Rhine in 1802 and are still socially and economically tied.

The old town of Rheinfelden is on the Rhine river. The Rhine can be traveled down by ship from Rheinfelden all the way to the North Sea.

The area around Rheinfelden was already settled about 10,000 years ago. At that time, people lived in the "Hermitage", a small natural cave next to the current highway. In the year 45 BC, a few kilometers west, the village Augusta Raurica was made, the first Roman town in Switzerland, near modern Kaiseraugst. Towards the end of the 4th century, a fort was built at the western settlement.

During the 17th century, there was very little time during which the city enjoyed peace. During the Rappenkrieg (a peasant uprising that lasted from 1612 until 1614), the city was ruined. Between 1633 and 1638, the Thirty Years' War reached Fricktal, where Rheinfelden played a big role. On 15 July 1633, Swedish and French troops ruined the city. On 5 February 1638, the city was put under attack by Protestant troops sent by Bernhard of Saxe-Weimar. On 28 February, the Battle of Rheinfelden began, as the city was attacked by the bigger Imperial and Bavarian troops sent by Johann von Werth and Federigo Savelli. The Protestants lost this battle and moved on. Bernhard brought them weapons, but in the second passage on 3 March they were defeated, as he and his men unexpectedly re-appeared on the battlefield, with Savelli and Werth falling into captivity.

By the end of the Thirty Years' War, the Austrians had built a fortress on the island to secure the southwestern border of the Breisgau. In 1678, French troops sent by François de Créquy fired at the city. In 1745, during the War of the Austrian Succession, the French made a fortress on the same ground and also ruined part of the city wall. On 17 July 1796, Rheinfelden was again occupied and looted by the French.

Because of the Treaty of Campo Formio in 1797, the Fricktal became a protectorate of the French, making the front line between the French Revolutionary and the Austrian troops in the War of the Second Coalition. On 20 February 1802, Rheinfelden was made the capital city of the new Canton of Fricktal, joining the Helvetic Republic in August, the point at which the city became mostly Swiss. The seat of the cantonal government was here instead of in Laufenburg. With the beginning of the Reichsdeputationshauptschluss (the German Mediatisation), Napoleon Bonaparte removed the canton of Fricktal. Since 19 March 1803, Rheinfelden has been the capital of the district of the same name, in the canton of Aargau.

All content from Kiddle encyclopedia articles (including the article images and facts) can be freely used under Attribution-ShareAlike license, unless stated otherwise. Cite this article:
Rheinfelden, Switzerland Facts for Kids. Kiddle Encyclopedia.