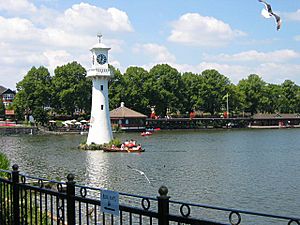 Roath Park (Welsh: Parc y Rhath) Cardiff, Wales, is one of Cardiff's most popular parks, owned by Cardiff County Council and managed by the Parks Section. It retains a classic Victorian atmosphere and has many facilities. The park has recently been awarded the prestigious Green Flag award to recognise its high quality and its importance to Cardiff. Roath Park has widely diverse environments across the park.

The park was built on 130 acres (0.53 km2) of reformed bogland, known then as a malarial bog, and includes a 30-acre (12 ha) lake 1.3 miles (2.1 km) around, formed by the damming of the Nant Fawr stream. It is a popular facility for fishing and rowing. There are four islands within a conservation area, home to many water birds. The main park includes a large playground, floral displays, the glasshouse conservatory and recreational areas. 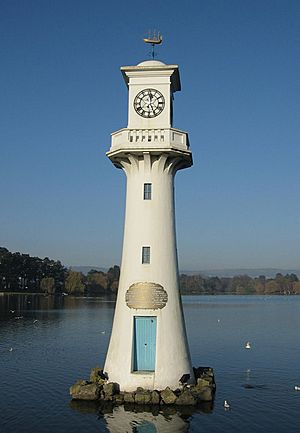 The land for Roath Park was donated to the city in 1887, primarily by the Marquis of Bute. The first section of the park was officially opened to the public in 1894 and it continued to be opened in sections over the following two decades. Work initially focused on creating the lake from an area of marshland. In 1915 a lighthouse was constructed in the lake containing a scale model of the 'Terra Nova' ship to commemorate Captain Scott's ill-fated voyage to the Antarctic from Cardiff in 1910. The park's atmosphere today still retains a Victorian and Edwardian character; the park itself is locally listed, and the surrounding streets are designated across three Conservation Areas to ensure this quality will be conserved.

There is a wide range of habitats in the park, which attracts a diverse variety of wildlife. The lake acts as an important habitat for over-wintering and breeding birds, including mallard, cormorants and herons. Four islands within the lake, which are inaccessible to the public, are safe nesting sites. The lake has a population of about 100 swans and a number of geese. Many wild birds are scared off by the abundance of geese in the lake, and local conservationists actively take measures to control their numbers. There is a wildflower garden included in the park where the area is managed to encourage wildlife and native species. 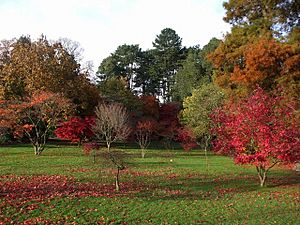 The Tree Register of the British Isles, is an organisation which records and measures trees in the UK. The biggest and best of their kind are called Champion Trees; there are twelve of these in Roath Park.

There is a trail with marker posts to identify the following trees:

Two oak trees predate the establishment of the park and have been calculated to be about 240 years old. 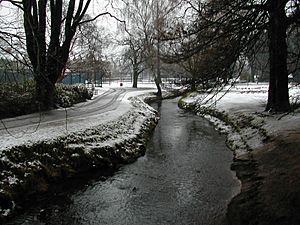 Roath Park Recreation Ground, towards the southern end of the park, contains sports pitches available for many different activities such as football, baseball and rugby union. High quality bowling greens and tennis courts are provided in the central section of the park, the Pleasure Gardens. There are also rowing boats which can be hired out and used on the lake. The lake is also home to a local radio-controlled boat society and is used for coarse fishing throughout the year. There are also two well equipped playgrounds.

There was swimming on the lake from when the lake opened. Unfortunately, the public swim had to stop after concerns about impurity of the water were raised in 1949. The Taff Swim, the Long Distance Swimming Championship of Wales, continued until 1963. However there were water carnivals and water skiing still happening in the 1960s and 1970s.

There are regular events within the park including guided walks, concerts, exhibitions etc. 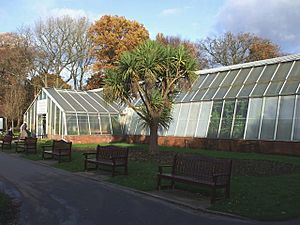 The Conservatory at Roath Park

There is a glasshouse in Roath Park which was built in the 1970s, replacing two earlier ones from the early 1900s. It contains many unusual species of plants and trees such as palms, banana trees and orchids. A pond and waterfall form a central feature, containing fish, terrapins and whistling ducks. Swan and duck food is on sale for feeding the birds on the lake.

The park boasts exceptional floral displays. These include the flowerbeds along the promenade and the famous rose garden, which included trial beds for the National Rose Society.

Roath Park Lake, with the cafe and boat hire to the left and the dam and promenade on the right

Roath Park is a long, fairly narrow park stretching from Roath into Cyncoed. The nearest district centre is at the southern end of the park on Wellfield Road and Albany Road. Access is also good to other open spaces:

All content from Kiddle encyclopedia articles (including the article images and facts) can be freely used under Attribution-ShareAlike license, unless stated otherwise. Cite this article:
Roath Park Facts for Kids. Kiddle Encyclopedia.