Rose is a town in Wayne County, New York, United States. The population was 2,369 at the 2010 census. The town was named after Robert S. Rose, an early landowner of the town.

The Town of Rose is an interior town of the county, located near the county center; it is west of Syracuse, New York.

Government offices for the town are located in North Rose.

The town was first settled around 1805.

The Town of Rose was created in 1826 from the Town of Wolcott. About 1840 a mass delusion took over the local inhabitants, and they came to believe that a treasure of gold and jewels was buried within the town. In spite of many secret, nocturnal excavations, nothing was ever found.

New York State Route 414 is a north-south highway through the town.

Sodus Creek flows northward through the town to Sodus Bay. 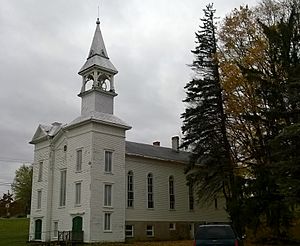 Rose Baptist Church in the hamlet of Rose

There were 904 households, out of which 27.7% had children under the age of 18 living with them, 56.0% were married couples living together, 9.2% had a female householder with no husband present, and 28.5% were non-families. 20.9% of all households were made up of individuals, and 11.3% had someone living alone who was 65 years of age or older. The average household size was 2.61 and the average family size was 3.02.

Communities and locations in the Town of Rose

All content from Kiddle encyclopedia articles (including the article images and facts) can be freely used under Attribution-ShareAlike license, unless stated otherwise. Cite this article:
Rose, New York Facts for Kids. Kiddle Encyclopedia.