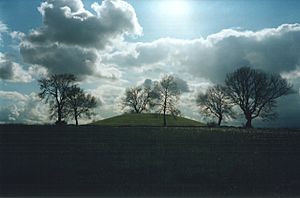 The royal site of the kings of Ulster, Eamhain Mhacha, now known as Navan Fort

The royal sites of Ireland served as the seats for the Gaelic kings of Ireland. Historical sources associate these sites with various medieval Irish kingdoms while archaeological investigations show that many royal sites were culturally significant thousands of years before recorded history. Ancient monuments, such as Neolithic burial mounds, standing stones, and cairns date back thousands of years and indicate the recurring—or even continuous—significance of these sites through millennia. The concept of a royal site goes back to medieval texts that describe these places as the titular seats of Irish kings where assemblies, athletic games, and inaugurations were held.

Each Irish kingdom is thought to have had its own royal site, but six sites are considered to be the most important. Four of these served as the royal sites of the four major provinces of Ireland. Cashel for Munster, Navan Fort for Ulster, Dún Ailinne for Leinster, and Carnfree of the Rathcroghan for Connaught. The Hill of Tara served as the seat for the Kings of Meath and the seat of the High King. Respectively, these sites are known in medieval sources as Caisel, Emain Macha, Dun Ailinne (Knockaulin), Cruiachain (Cruachu), and Teamhair. Uisneach represented the union of the provinces and may have served as a meeting place for the kings. The major sites, excluding Navan Fort (located in Northern Ireland), have been listed as a potential UNESCO World Heritage Site.

These primary sites might be associated with less prominent sites that served other purposes for the kingship. For instance, the King of Tara presided over assemblies at Tailtiu (Teltown) and Tlachgta (the Hill of Ward) during the Lughnasadh festival.

Features of a royal site

Historian Michael Herity analysed several historically designated royal sites to determine what feature they shared. He noted that each had ring-barrows, most had hillforts and linear earthwork avenues, a few had cairns or standing stones, but he noted the lack of these may have been due to these structures' fragility. Herity also notes that literary sources celebrate these sites as cemeteries and may indicate ancestor worship. Herity also notes that a composite mound and circular enclosure structure, exemplified by the combination of An Forradh and Teach Cormaic, is almost exclusively found on royal sites. Less frequent features include sacred trees ("bileda"), stone chairs, inauguration stones, stone basins, and churches. 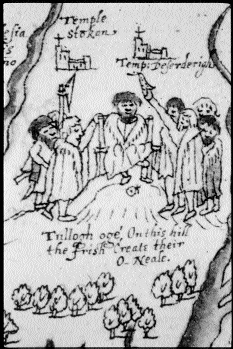 Detail of a copy of Richard Bartlett's 1602 map of Ulster that included this depiction of an Uí Néill (O'Neil) inauguration on Tulach Óg. A figure on the right, an Ó Catháin, can be seen holding a shoe over the king's head as part of the "single shoe" ritual.

Many royal sites served as ceremonial locations for inauguration ceremonies. The prospective monarchs benefited from associating themselves with the ancient monuments and cultural significance of the royal sites. Inauguration ceremonies treated the prospective king's lands as "betrothed" and the rituals followed the pattern of a marital feast or banais righe. The hilltop location of the inauguration sites offered panoramic views of the "betrothed" lands during the ceremony. Similar feis ceremonies in the early Middle Ages represented a direct marriage between the king and a goddess representing his lands. The significance of the marriage analogy declined in the later Middle Ages as kingship became more oriented toward ownership.

Historical accounts of inauguration ceremonies are scarce and varied. One account suggests that the Cenél Conaill king mated with a mare, had it ritually slaughtered and boiled, and then bathed in its broth while his subjects drank from the bath. This accounts has been criticised as propaganda designed to make the Irish look barbarous or pagan but would be consistent with an Indo-European tradition of inaugural horse slaughter. Records of inaugurations in the later Middle Ages indicate that there was no set inauguration ceremony, but races, drinking liquor, reading poetry, processions representing the kings lands, and granting the White Wand or rod of sovereignty seem to have been basic parts of the ceremony. Some inaugurations included the rite of the "single shoe." Accounts document the use of the rite at the inaugurations of the Uí Choncobhair in the fifteenth century and the Uí Néill and Méig Uidhir in the sixteenth century. An account of the Choncobhair ceremony records the would-be king leaving a single slipper at his inauguration site to signify his claim. The next day, the Mac Diarmada, a vassal family with the role of "king-maker", placed a shoe on his lord's foot during the inauguration. In the Uí Néill ceremony, the would-be king sat on a stone chair on the inauguration hill and Uí Ágáin or, in later ceremonies, Ó Catháin, (king-makers for the Uí Néill), cast the shoe over the seated prince's head. The throwing of the shoe may have been evolved from a tradition of throwing a shoe for good luck. The shoe may also be related to the footprints carved in inaugural stones. 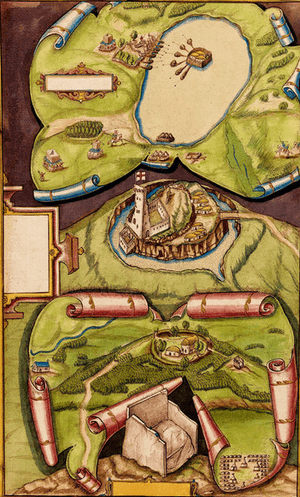 Detail of Bartlett's map with an inuauguration chair located at Tullyhogue Fort, Co. Tyrone at the bottom.

Inauguration sites had a diversity of features, attesting to their diverse ancient origins. Some of these ancient features seem to have been adapted for the purpose of inauguration ceremonies such as the flattening of the top of a burial mound. Many inauguration sites have small mounds with a flattened area on top just large enough for a man to stand on. These features have been interpreted as "throne mounds," and might have allowed a king to stand on a summit and survey the lands and people below. Several cases of using stone inauguration chairs were documented, although the use of a more conventional chair "throne" was probably an import dating to the later medieval period. Cartographer Richard Bartlett drew the chair at Tulach Óg the inauguration site of the Ui Neill of Tir Eoghain. The only extant Irish inauguration chair, now in the Ulster Museum, belonged to the Ui Neill dynasty of the Clann Aeda Buide.

All content from Kiddle encyclopedia articles (including the article images and facts) can be freely used under Attribution-ShareAlike license, unless stated otherwise. Cite this article:
Royal sites of Ireland Facts for Kids. Kiddle Encyclopedia.