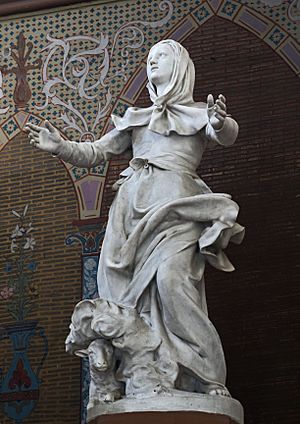 Sainte Germaine lived from 1579 to 1601. She was born in a village in France called Pibrac, which is about ten miles from Toulouse, France.

She was born with a disfigured hand and a disease called scrofula. When she was a baby, her mother died. Germaine's father married again, but she was cruel to Germaine. Germaine's stepmother did not want the other children to contract scrofula, so she talked her husband into keeping Germaine away from the house. When she was very young she started to be a shepherdess. At night she slept in the stable or on vine branches in a roof space. In early ages she learned to practice humility and patience. She was not lonely because she had a gift with a sense of presence of God and other spiritual things. Her daily food was bread and water. She loved Jesus and the Blessed Virgin Mary. She went to church every day. When she heard the church bell ring, she fixed her staff on the ground and left the sheep in the care of Jesus while she was in mass. Even though the flock was near a forest filled with wolves, the sheep were never harmed. After heavy rains or the snow melted, it was hard to cross to go to church. Her only book was the Rosary, and she had great devotion to the Angelus. Several times people saw the water make a passageway for Germaine to cross without wetting her cloths. She helped the poor by sharing her bread with them. One day Germaine's father forbade her wife to treat Germaine cruelly, and gave Germaine a place in the house. Germaine begged to be allowed to keep her humbler way of life. Now, when everyone began to realize Germaine's holiness, she died. She had not awoken at her usual hour one early summer morning of 1601, so her father went to look for her. He found her dead on the vine branches. She was 22 years old. She was buried in front of the stand in the Church of Pibrac.

All content from Kiddle encyclopedia articles (including the article images and facts) can be freely used under Attribution-ShareAlike license, unless stated otherwise. Cite this article:
Saint Germaine Facts for Kids. Kiddle Encyclopedia.