Kids Encyclopedia Facts
For other rivers with the same name, see List of rivers named Sainte-Anne. 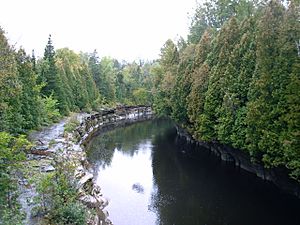 The Sainte-Anne River is a tributary of the north shore of the Saint Lawrence River, whose mouth is located at Sainte-Anne-de-la-Pérade. This river flows in the province of Quebec, Canada, in the administrative regions of:

It is well known for ice fishing, with the primary catch being Tomcod, (poulamon in French), during the winter at Ste-Anne-de-la-Pérade. A small village builds up from the end of December to mid-February.

It is also regionally known for flooding, especially in St-Raymond, and sometimes in St-Casimir.

Apart from the village areas, forestry, recreational tourism and agriculture are the main economic activities on this hydrographic side.

The surface of the Sainte-Anne river (except the rapids areas) is generally frozen from the beginning of December to the end of March; however, safe circulation on the ice is generally done from the end of December to the beginning of March. The water level of the river varies with the seasons and the precipitation; the spring flood occurs in March or April.

The origin of the name of the river is unknown. Samuel de Champlain gave it the name of Sainte-Marie river in 1609 without specifying its reasons. It was registered under the name of Sainte-Anne river on the map of Jean Bourdon of 1641, an appellation which quickly became essential. The Hurons, meanwhile, call it "Telahiar".

The toponym "Rivière Sainte-Anne" was formalized on December 5, 1968 at the Commission de toponymie du Québec.

Intermediate course of the Sainte-Anne river, downstream of the Chézine river (segment of 39.8 kilometres (24.7 mi))

Intermediate course of the Sainte-Anne river, downstream from the Bras du Nord (segment of 20.5 kilometres (12.7 mi))

Intermediate course of the Sainte-Anne river, downstream of the Jacquot river (segment of 27.6 kilometres (17.1 mi))

Lower course of the Sainte-Anne river, upstream of Saint-Casimir (segment of 27.9 kilometres (17.3 mi))

The river flows mainly in a south-westerly direction over a length of 123 kilometres (76 mi) to Sainte-Anne-de-la-Pérade, and finally empties into the St. Lawrence river at sea level.

The watershed has an area of 2,694 square kilometres (1,040 sq mi). Its average flow at its mouth is 78 m3/s. The main tributaries of the river are, from upstream to downstream, the Tourilli River, the Chézine River, the Talayarde River, the Bras du Nord, Jacquot River, Noire River, Blanche River, Niagarette River and Charest River. It also includes 900 kilometres (560 mi) of watercourse. The basin includes 828 lakes, the most important of which are Lakes Montauban, Long, Blanche, Carillon and Clair.

Sainte-Anne is part of two geological provinces. Upstream of Saint-Alban, the subsoil is part of the Laurentides, and is composed of igneous rocks and metamorphic, mainly gneiss and granite, resistant to erosion. The river enters the St. Lawrence Lowlands downstream from Saint-Alban and the source rock consists mainly of limestone and shale from the Paleozoic.

The whole is covered with marine and continental deposits from the Quaternary, the thickness of which is approximately 40 metres (130 ft) in the St. Lawrence Lowlands and less than 5 metres (16 ft) in the Laurentians.

It is estimated that there were approximately 16000 people who lived in the Sainte-Anne basin in 2001. The town of Saint-Raymond alone has half the population of the basin. Four other villages are located on the course of the river, namely Sainte-Christine-d'Auvergne, Saint-Alban, Saint-Casimir and Sainte-Anne-de-la-Pérade. 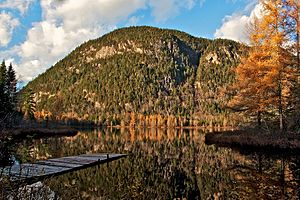 The forest dominates, occupying 80% of the hydrographic basin. The public forest, which includes 56% of the forest area, is composed of 58% of mixed forests, 26% of coniferous and 16% of broadleaved. The basin extends over four bioclimatics areas, namely maple grove to linden, maple grove to yellow birch, the fir with yellow birch and the fir white birch.

The river and its tributaries is frequented by 33 species of fish. The main species used for sport fishing living in the river are brook trout (Salvelinus fontinalis), walleye (Sander vitreus) and the smallmouth bass (Micropterus dolomieu). 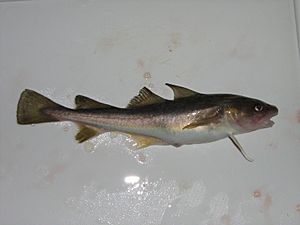 The river is also recognized as an important spawning ground for the Atlantic tomcod (Microgadus tomcod). There are between 600 and {800 million of individuals who come to breed in the river between December and February, two million of which are fished each year. The spawning ground would have been created in 1894 by a major landslide at Saint-Alban, giving the river a bottom of sand and gravel ideal for the reproduction of fish.

The river was known to the St. Lawrence Iroquoians who already practiced there ice fishing around the year 1000.

All content from Kiddle encyclopedia articles (including the article images and facts) can be freely used under Attribution-ShareAlike license, unless stated otherwise. Cite this article:
Sainte-Anne River (Les Chenaux) Facts for Kids. Kiddle Encyclopedia.