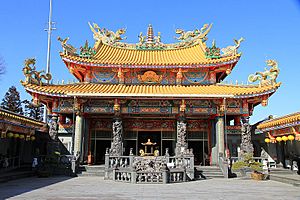 Sakado is located in the geographic center of Saitama Prefecture.

Sakado-juku was a post station on the Nikkō Wakiōkan highway connecting Hachiōji with Nikkō from the Muromachi period onwards. During the late Edo period and early Meiji period, the area was noted for sericulture. The village of Sakado was created within Iruma District, Saitama with the establishment of the municipalities system on April 1, 1889 and was elevated to city status on December 10, 1896. On July 1, 1954, Sakado annexed the neighboring villages of Miyoshino, Issai, Oya and Suguro. On September 1, 1976, Sakado was elevated to city status.

Sakado is a regional commercial center with some light and precision manufacturing and food processing.

All content from Kiddle encyclopedia articles (including the article images and facts) can be freely used under Attribution-ShareAlike license, unless stated otherwise. Cite this article:
Sakado, Saitama Facts for Kids. Kiddle Encyclopedia.