Samuel Dexter (May 14, 1761 – May 4, 1816) was an early American statesman who served both in Congress and in the Presidential Cabinet.

Born in Boston, Massachusetts, to the Rev. Samuel Dexter, the 4th minister of Dedham, he graduated from Harvard University in 1781 and then studied law at Worcester under Levi Lincoln, Sr., the future Attorney General of the United States. After he passed the bar in 1784, he began practicing in Lunenburg, Massachusetts. 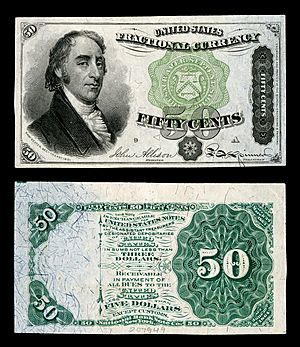 Dexter depicted on US fractional currency.

All content from Kiddle encyclopedia articles (including the article images and facts) can be freely used under Attribution-ShareAlike license, unless stated otherwise. Cite this article:
Samuel Dexter Facts for Kids. Kiddle Encyclopedia.