Sanday is one of the inhabited islands of Orkney that lies off the north coast of mainland Scotland. With an area of 50.43 square kilometres (19.5 sq mi), it is the third largest of the Orkney Islands. The main centres of population are Lady Village and Kettletoft. Sanday can be reached by Orkney Ferries or by plane from Kirkwall on the Orkney Mainland.

The Picts were the pre-Norse inhabitants of Sanday but very few placenames remain from this period. The Norse named the island Sandey or Sand-øy because of the predominance of sandy beaches and this became "Sanday" during the Scots and English speaking periods. The similarly named Sandoy is in the Faroe Islands.

Many places and natural features derive from Old Norse. According to Dorward (1995), the placename Kettletoft means "Kettil's croft" although "toft" in this context may mean ""abandoned site of house" from the Norse topt. The suffix -bister found in Sellibister and Overbister is from bólstaðr meaning "dwelling" or "farm". Other common suffixes are -wick and -ness from the Norse vik and nes and meaning "bay" and "headland" respectively. According to Frances Groome, Otterswick was originally known as Odinswic.

Sanday lies south of North Ronaldsay and east of Eday and Westray. It is divided naturally into two roughly equal halves by Otterswick, a bay which runs in from the north, and Kettletoft Bay in the south. The narrow isthmus between them formed the boundary between the historic parishes Cross and Burness to the west and Lady to the east. The novelist Eric Linklater described Sanday's shape seen from the air as being like that of a giant fossilised bat.

Changing post-glacial sea levels will have much altered the shape of this low-lying island since the last ice age. William Traill described a gale in 1838 which removed 20 hectares (49 acres) of sand in Otterswick Bay. This revealed a dark layer of decayed vegetation under fallen trees up to 60 centimetres (24 in) in diameter. The trees lay "as if felled by a storm" and were visible under the sea for 6.5 kilometres (4.0 mi). A search for these tree remains in the 20th century was unsuccessful.

Inland it is fertile and agricultural and there is some commercial lobster fishing. The underlying geology is predominantly Devonian sediments of the Rousay flagstone group with Eday sandstone in the south east.

There are several small bodies of freshwater on the island including North Loch, Bea Loch near Kettletoft and Roos Loch on the Burness peninsula. 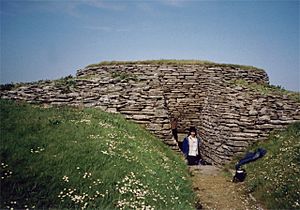 The Neolithic Quoyness chambered cairn, dates from around 2900 BC. An arc of Bronze Age mounds surrounds this cairn on the Elsness peninsula. A large man-made mound at Pool was excavated in the 1980s. This indicated a Neolithic structure made of turf or burnt peat, a later pre-Viking sub-circular structure with pavings and cells, and a Viking stone and turf rectangular building dated to the late 8th or early 9th century. Various implements were also discovered including pre-Norse hipped pins and pottery from both the pre-Viking and Norse periods. A predominance of fish and animal bones suggests the site was used for meat processing. Storms in January 2005 exposed a Bronze Age burnt burial mound at Meur. There are several ruined Iron Age brochs on the island such as the Broch of Wasso, a 5-metre-high (16 ft) mound at Tres Ness. 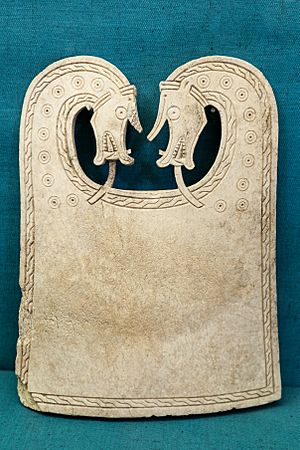 The Scar dragon plaque found in 1991

The nature of the culture that built the brochs remains a matter of debate but it is known that later Iron Age Orkney was part of the Pictish kingdom and from at least the mid-6th century onwards that Christianity had spread to the islands. However, the archeological record for this period is sparse and little is known of life on Sanday at this time beyond that which can be assumed from a knowledge of Pictish society elsewhere.

Orkney became part of the Scandinavian polity from perhaps the 9th century onwards. In 1985 the Scar boat burial was discovered on the coast of Sanday near Burness. This Norse-era vessel, which had been 6.5-metre (21 ft) long and 1.5-metre (4.9 ft) wide, had rotted away, leaving more than 300 iron rivets. The enclosure, dated to 875—950 AD, was found to contain the remains of a man, a woman, and a child, along with numerous grave goods. These included a sword, quiver with arrows, bone comb, gaming pieces and the Scar dragon plaque, made from whale bone.

During the medieval period Sanday had 36 ouncelands, which may have been divided into two 'huseby' districts for taxation purposes with Lady to the east forming a unit with Stronsay and Cross and Burness to the west being combined with Eday and other isles to the west and north. The main farm for the western district may have been located between Pool Bay and Warsetter at a site called Housay that is now just a mound.

In the mid-17th century an annexe to Blaeu's Atlas Novus of Scotland recorded that Sanday's low lying topography meant that "shipwreck often occurs to those who sail there at night. The inhabitants of Sanday earnestly and often desire this to happen, so that they get a supply of material for fire from the wrecked ships". The writer went on to state that the lack of peat meant that dried seaweed was "saved like treasure" for cooking fires and that only the better-off citizens could afford to bring peat from Eday "over the most fearful sea". 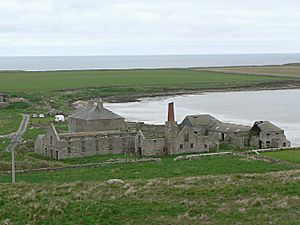 The ruins of the "model farm" at Stove

"Both Men and Women are fashionable in their cloths, no Men here use Plaids, as they do in our Highlands;In the North Isles of Sanda Westra &c. Many of the Countrey People wear a piece of a Skin, as of a Scale, comonly called a Selch, Calf or the lik. for Shoes, which they fasten to their Feet with stringes or thongs of Leather. Their Houses are in good order, and well furnished, according to their qualities. They generally speak English." 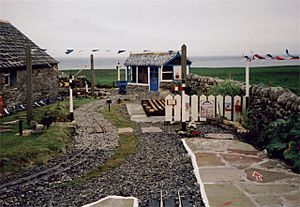 As part of the agricultural improvement movement of the 19th century the brothers Malcolm and Samuel Laing created a "New Model Farm" near the Loth ferry terminal at the south end of the island. They introduced merino sheep, and the ruins of the steam engine house and the red-brick chimney and boiler house are still visible. Although such innovations brought increased productivity and were widely copied in Orkney they also impoverished the substantial population of landless cottars who were increasingly marginalised.

During World War II, the Royal Air Force built a Chain Home radar station at Whale Head near Lop Ness. This necessitated the building of a large camp at Langamay to house the military personnel, which incorporated a cinema.

Sanday also once boasted the most northerly passenger railway in the United Kingdom, a privately owned rideable miniature installation near Braeswick, the Sanday Light Railway.

Start Point lighthouse on Sanday was completed on 2 October 1806 by engineer Robert Stevenson. It was the first Scottish lighthouse to have a revolving light and since 1915 has exhibited distinctive black and white vertical stripes which are unique in Scotland. The light was automated in 1962 and is powered by a bank of 36 solar panels.

Despite the presence of the lighthouse, HMS Goldfinch was wrecked in fog on Start Point in 1915.

In 2004, three wind turbines with an installed capacity of 8.25 Megawatts were erected by Scottish and Southern Energy (SSE) at Spurness. Sanday Community Council successfully negotiated a wind farm community fund with SSE which will be benefitting the people of the island for the lifetime of the turbines, anticipated to be 20 to 25 years.

create an economically prosperous, sustainable community that is connected with the wider world, but remains a safe, clean environment, where we are proud to live, able to work, to bring up and educate our children, to fulfill our own hopes and ambitions, and to grow old gracefully, enjoying a quality of life that is second to none.

Projects include the establishment of a sports hall and youth centre, the creation of a local sound archive, and a Countryside Ranger service.

A district tartan has been designed for Sanday by one of the island's residents, although it has not yet been officially adopted by the island authorities. It represents the sea, the distinctive sandy beaches and green meadows of the island, and the vertical stripes of Start Point lighthouse.

In July 2008 a concert held on the island was the culmination of an innovative musical project. The main aim of project was to set up a music-teacher training programme that would provide additional music tuition in the school and throughout the community.

There is a legend that a Sanday girl was once given a book called The Book of Black Art by a witch, and that the Devil would claim the soul of anyone who still owned the book at their death. This book was only able to be passed on by selling it. A local clergyman (Matthew Armour) took it of her hands and he managed to get rid of it by means not described in the tradition before his death in 1903. At the ruined Kirk of Lady, near Overbister, are the "Devil's Clawmarks": incised parallel grooves in the parapet of the kirk.

All content from Kiddle encyclopedia articles (including the article images and facts) can be freely used under Attribution-ShareAlike license, unless stated otherwise. Cite this article:
Sanday, Orkney Facts for Kids. Kiddle Encyclopedia.