Kramer Imax Theatre – The only one of its kind in Saskatchewan. The theatre completed conversion to IMAX 3D in October, 2010.

Educational Programming - Educational and entertaining programs are delivered to students and communities all across Saskatchewan and to those who cannot come to the Science Centre through the Science Outreach program.

Special Events - A number of special events each year. Adult Science Nights, Ignite! Festival, the After Dark Film Series, Fantasy Food, as well as attendance at public events such as Canada Day celebrations extend the reach of Science Centre programming. 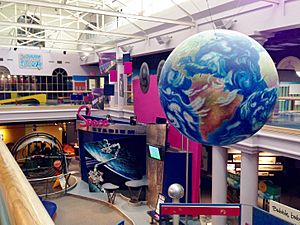 The Saskatchewan Science Centre has many permanent exhibits which make up the backbone of the operations of the centre. These exhibits are complemented by travelling and temporary exhibits as well as special programs that the Centre runs from time to time.

Critters! - Many animals make their home at the Saskatchewan Science Centre including Barb the bearded dragon, and Polly the sugar glider. The Science Centre also has snakes, a great horned owl, salamanders and more.

Ukrainian Science Park - This exterior park is free for anyone to use and is located outside of the Science Centre. Featuring a variety of pulleys, tunnels, and other game-type science experiments for children.

WILD! Saskatchewan - This interactive exhibit is about the environment and why people need to do more to protect it.

Space Stadium Canada - This exhibit is the heart of the display floor and explores the contributions that Canada has made to space exploration. The centre of the display features the gyro gym, a spinning device similar to one that was developed by NASA for astronaut training.

Richardson Ag-Grow-Land - Studying Saskatchewan's contribution to the world of agriculture, this exhibit looks at the high-tech agriculture industry in Saskatchewan as well as the practices of modern farming and how food is grown, harvested, processed, and delivered.

Science of Hockey - Using science to help understand the sport of hockey, this exhibit features a mindball game where participants can attempt to move a ball with brainwaves, time how fast they can run, test their strength, and compete against a video goalie and have their shots on the goal evaluated.

There are other permanent displays as well that aim to provide a mix of entertainment and education to visitors.

The museum is affiliated with the Saskatchewan Museums Association and the Canadian Association of Science Centres.

All content from Kiddle encyclopedia articles (including the article images and facts) can be freely used under Attribution-ShareAlike license, unless stated otherwise. Cite this article:
Saskatchewan Science Centre Facts for Kids. Kiddle Encyclopedia.