Scorpion Ridge is a 5,832-foot (1,778 m) prominence, and a ridgeline-landform shaped like a scorpion, composed of the colorful red-orange Supai Group rocks, a linear ridge with two south-projecting arms of ridgeline that trend south to the Colorado River. Scorpion Ridge is approximately 11 miles (18 km) northwest of Grand Canyon Village near the beginning of West Grand Canyon. The Scorpion Ridge-Sagittarius Ridge north–south ridges are adjacent west to the North Rim ridgeline that extends south to Imperial Point, overlooking the beginning of West Grand Canyon. The position of Scorpion Ridge causes the Colorado River to flow west, then northwest, then north. Surrounding the two ridgelines to the Colorado, the river has the Serpentine Rapids west, the Sapphire Rapids (the drainage between the two scorpion-arms), and the Willie Necktie Rapids, just downstream from Tuna Creek confluence, and Canyon, the major drainage at the east of the Imperial Point ridge.

The Scorpion Ridge (body and arms) trend north-northeast for 2.5 miles (4.0 km); both arms are roughly 1.0 mile (1.6 km) long, with the trendline, and curved inward like enclosing arms. The high point of Scorpion Ridge (5,832 ft) is near the center of the north trend (composed of a remainder cliff-spire of Esplanade Sandstone on Wescogame Formation on platform-ridgeline of Manakacha Formation); the east arm height ends at 4,961 feet (1,512 m); the west arm ends at 4,594 feet (1,400 m). On the Colorado, Scorpion Ridge is opposite Geikie Peak, Pollux Temple, Serpentine Canyon outfall, west, and Sapphire Canyon outfall, east. 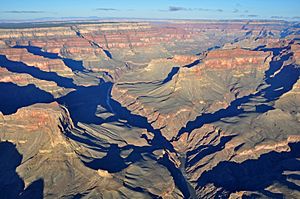 Scorpion Ridge has the common sequence of rock layers of the Grand Canyon. Because of the landform's shape and position, broad colorful dull-greenish slope-forming slopes of Bright Angel Shale surround the landform, ending at short platform cliffs of Tapeats Sandstone, upon Granite Gorge and the Vishnu Basement Rocks. 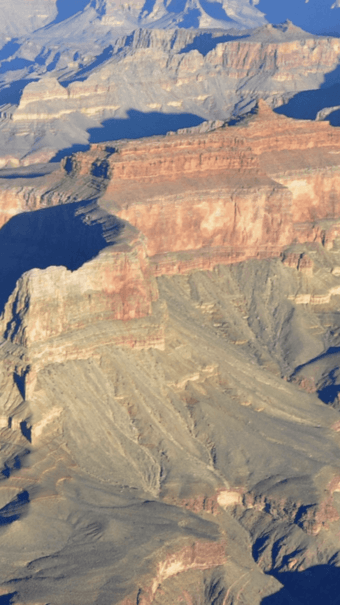 The extended ridgelines of Scorpion Ridge are mostly unit 2 of the Supai Group, protecting the slopes underneath of the unit 1, the Watahomigi Formation. Unit 2, the Manakacha Formation is a cliff-former, but also an erosion-resistant platform-former. The most common, and famous platform-former in the Grand Canyon, is the top of the Redwall Limestone cliffs, which supports many prominences in the Grand Canyon.

All content from Kiddle encyclopedia articles (including the article images and facts) can be freely used under Attribution-ShareAlike license, unless stated otherwise. Cite this article:
Scorpion Ridge Facts for Kids. Kiddle Encyclopedia.