Sega Dreamcast (Japanese: ドリームキャスト; originally called "Dural," and "Katana") is the fourth and last home console made by Sega that can play video games. It was sold before the PlayStation 2, GameCube, or Xbox came out. However, not many people bought it after the PlayStation 2 was released, so in the end Sega decided to stop making them.

When it was time to make another video game machine after the Sega Saturn was released, Shoichiro Irimajiri asked Tatsuo Yamamoto from IBM Austin and his group to create it. However Hideki Sato's old group that made video game machines did not like this. Because of this, the two groups were in a competition to make the best machine.

On April 1997, 3dfx told people that Sega was using their 3dfx Voodoo 2 for a video game machine. Sega however wanted this to be a secret and became very angry. Because of this, Sega used Hideki Sato's "Katana" machine instead of Tatsuo Yamamoto's.

Later on, 3dfx sued Sega because they thought Sega broke their promise to them.

The Dreamcast was released in Japan in November 27, 1998, and then released September 9, 1999 in North America. Originally, many people liked the Dreamcast and it sold a lot. In the United States, 300,000 machines were sold on the first week and Sega earned $98.4 million dollars.

To help the Dreamcast sell even more, Sega told many stores to show some of their best games to customers, like Soul Calibur, Sonic Adventure, Power Stone, and Hydro Thunder. 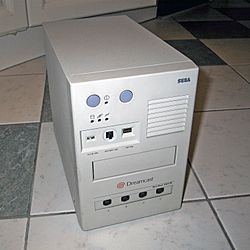 Set5, a machine used when making the Dreamcast.

Outside the USA and Japan

Many of these companies also forced people to pay more for the Dreamcast than in the USA and Japan.

Some games were not even sold in Europe, because Sega was more focused on selling the Dreamcast in the USA. Because of this, a lot of people who used to like Sega now liked Sony.

End of the Dreamcast

Sega's prestige among gamers was at the time heavily damaged because of the lack of good management/marketing back from the Sega Saturn, this also affected certain game developers such as Electronic Arts refusing to develop for the system because of the risk of the Dreamcast becoming just like the Sega Saturn, not selling well. This was a factor is why this Incredible ground breaking console did not reach its full potential.

In the end, Sega told people on January 31, 2001 that they would be discontinuing the console production. Sega's last video game sold for Dreamcast was Puyo Pop Fever, which was released on February 24, 2004.

These accessories were sold by Sega to be used on the Dreamcast:

All content from Kiddle encyclopedia articles (including the article images and facts) can be freely used under Attribution-ShareAlike license, unless stated otherwise. Cite this article:
Sega Dreamcast Facts for Kids. Kiddle Encyclopedia.