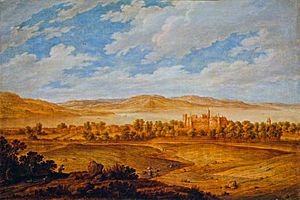 Seton Palace in 1638 by Alexander Keirincx, National Galleries of Scotland

Seton Palace was situated in East Lothian, a few miles south-east of Edinburgh near the town of Prestonpans. Often regarded as the most desirable Scottish residence of the sixteenth and seventeenth centuries, the palace was erected in the 15th century by George, 4th Lord Seton.

The palace belonged to the Lords Seton by the 1500s and was a popular retreat for Mary, Queen of Scots. She had spent her honeymoon with Lord Darnley there in July 1565. Mary played golf at Seton, and it was said she played "pall-mall and golf". "Pall-mall" was an early form of croquet. In the 17th-century, the completed palace was triangular in plan, with three wings around a courtyard.

The date when the original palace was built is uncertain but it was located on the lands of Seton and Winton. Richard Maitland's History of the House of Seytoun mentions some aspects of the building. He wrote that George Seton, 5th Lord Seton (d. 1513) completed the "jemmay house", a wing which his grandfather, John, Master of Seton (d. 1476) had begun. His widow, Janet Hepburn, Lady Seton built the fore-work or gatehouse. The palace was burnt by an English army on 16 May 1544 after the burning of Edinburgh. The English commander Lord Hertford wrote that while he was burning the palace, Lord Seton was nearby with some horsemen, "so that he might well see his own house and town on fire." Lord Seton was married to a French lady-in-waiting Marie Pieris, their daughter Mary Seton was a companion of Mary, Queen of Scots. 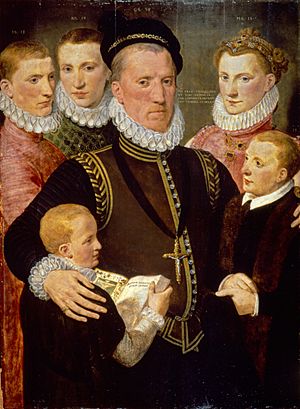 The great tower and the "jemmay house" were subsequently restored by Sir William Hamilton of Sanquhar, Captain of Edinburgh Castle and father-in-law of George Seton, 7th Lord Seton. The walled garden was also built at this time. The old great tower collapsed in 1561, the structure comprised by new windows. Janet Hepburn's gatehouse was then almost entirely rebuilt.

Mary, Queen of Scots was a frequent visitor, and in January 1562 New Year's day was celebrated with a poem by Alexander Scott filled with "advice for princes" for just rule in Scotland, Ane New Yeir Gift to Quene Mary.

In 1584 Lupold von Wedel admired the tall hedges of the garden but could not get in. James VI stayed at Seton Palace in September 1589 waiting in vain for Anne of Denmark to arrive in Scotland. The English ambassador Lord Burgh was welcomed with a banquet on 24 February 1593. On 31 May 1597 Anne of Denmark travelled to Seton in a litter, despite the rain, while James VI went to Falkland Palace. Lord Walden came to Seton Palace to see Anne Hay, Countess of Winton and her children in 1613. King James stayed at Seton again on 15 May 1617, and the poet William Drummond of Hawthornden presented his Forth feasting.

Historical records indicate that it was the most magnificent palace in Scotland in the 17th Century. Alexander Nisbet described some details of the interior. Above the fireplace in the Great Hall were the Seton heraldry quartered with the Earl of Buchan encircled with a collar which Nisbet claimed to represent the Order of the Thistle. The ceiling of another room, called "Samson's Hall" incorporated 28 armorial achievements of families of France, Scotland and Lorraine, "curiously embossed and illuminated." Viscount Kingston mentions seeing a mural painting on the end wall of the Long Gallery which he believed showed the 7th Lord Seton driving a wagon during his years of exile in France following the abdication of Mary, Queen of Scots.

The family built another house further inland, Winton Castle, on an old site around 1630, and architectural details there resemble the fragments of dormers windows and carved strapwork remaining from Seton Palace and now displayed at the adjacent Seton Collegiate Church. 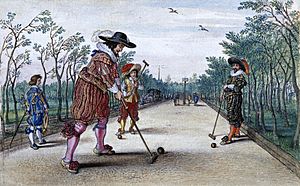 Drawing of a game of pall-mall between Frederick V of the Palatinate and Frederick Henry, Prince of Orange by Adriaen van de Venne, circa 1625

King Charles I commissioned a view of the Palace from Alexander Keirincx in 1638. Despite the sea air, the gardens were stocked with sycamores, walnut trees, apple and other fruit trees. There would have been a lawn or court for pall-mall, as played by Mary, Queen of Scots in 1567. James VI recommended the game for his son Prince Henry in his Basilikon Doron.

Produce from the gardens included strawberries in July. It is said that one of the sixteenth-century gardeners had a son who became a pirate. He came back and gave the Earl of Winton a rare sea shell, a turbo pica from the West Indies. The earl had it made into a snuff box with a silver lid by George Heriot. It descended from David Seton of Parbroath to the family of the author Robert Seton in New York.

The Seton family, who had acquired the title "Earl of Winton" had their estates confiscated after the Jacobite rising of 1715. The palace was burned out during the Rising and in 1780, it was described as being in ruins.

In 1789 the owner of the site, Lt Col Alexander Mackenzie of the 21st Dragoons, commissioned Robert Adam to build a mansion that would become Seton Castle. Some of the stone from the palace was used in the construction.

Some of the walls of the famous formal gardens of the 16th and 17th century remain, with rounds or lookout turrets at the corners.

All content from Kiddle encyclopedia articles (including the article images and facts) can be freely used under Attribution-ShareAlike license, unless stated otherwise. Cite this article:
Seton Palace Facts for Kids. Kiddle Encyclopedia.