A sewing machine is used to stitch fabric together with thread. Sewing machines were an invention of the industrial revolution that made it possible to sew faster than people could sew by hand. Some sewing machines are also used for embroidery.

There are four main types of sewing machines: 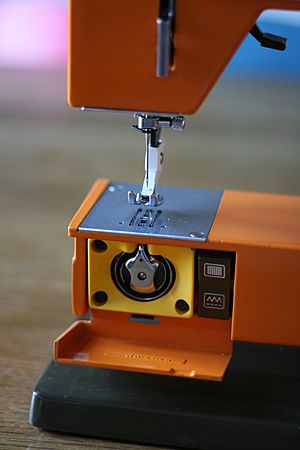 The bobbin driver of a Husqvarna 3600 sewing machine

Sewing machines can make a great variety of plain or patterned stitches. Ignoring strictly decorative aspects, over three dozen distinct stitch formations are formally recognized by the ISO 4915:1991 standard, involving one to seven separate threads to form the stitch.

Chainstitch was used by early sewing machines and has two major drawbacks:

A better stitch was found in the lockstitch. The chainstitch is still used today in clothing manufacture, though due to its major drawbacks, it is generally paired with an overlock stitch along the same seam.

Lockstitch utilising a rotating hook invented by Allen B Wilson. This is employed on many modern machines

Lockstitch is the familiar stitch performed by most household sewing machines and most industrial "single needle" sewing machines from two threads, one passed through a needle and one coming from a bobbin or shuttle. Each thread stays on the same side of the material being sewn, interlacing with the other thread at each needle hole by means of a bobbin driver. As a result, a lockstitch can be formed anywhere on the material being sewn; it does not need to be near an edge. 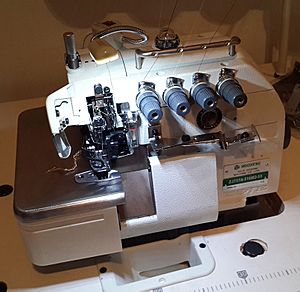 Overlock also known as "serging" or "serger stitch", can be formed with two to four threads, one or two needles, and one or two loopers. Overlock sewing machines are usually equipped with knives that trim or create the edge immediately in front of the stitch formation. Household and industrial overlock machines are commonly used for garment seams in knit or stretchy fabrics, for garment seams where the fabric is light enough that the seam does not need to be pressed open, and for protecting edges against raveling. Machines using two to four threads are most common, and frequently one machine can be configured for several varieties of overlock stitch. Overlock machines with five or more threads usually make both a chainstitch with one needle and one looper, and an overlock stitch with the remaining needles and loopers. This combination is known as a "safety stitch". A similar machine used for stretch fabrics is called a mock safety.

Coverstitch is formed by two or more needles and one or two loopers. Like lockstitch and chainstitch, coverstitch can be formed anywhere on the material being sewn. One looper manipulates a thread below the material being sewn, forming a bottom cover stitch against the needle threads. An additional looper above the material can form a top cover stitch simultaneously. The needle threads form parallel rows, while the looper threads cross back ans. It is widely used in garment construction, particularly for attaching trims and flat seaming where the raw edges can be finished in the same operation as forming the seam.

A zigzag stitch is a variant geometry of the lockstitch. It is a back-and-forth stitch used where a straight stitch will not suffice, such as in preventing raveling of a fabric, in stitching stretchable fabrics, and in temporarily joining two work pieces edge-to-edge.

When creating a zigzag stitch, the back-and-forth motion of the sewing machine's needle is controlled by a cam. As the cam rotates, a fingerlike follower, connected to the needle bar, rides along the cam and tracks its indentations. As the follower moves in and out, the needle bar is moved from side to side. Very old sewing machines lack this hardware and so cannot natively produce a zigzag stitch, but there are often shank-driven attachments available which enable them to do so.

All content from Kiddle encyclopedia articles (including the article images and facts) can be freely used under Attribution-ShareAlike license, unless stated otherwise. Cite this article:
Sewing machine Facts for Kids. Kiddle Encyclopedia.