Shah Mosque (Persian: ﻣﺴﺠﺪ ﺷﺎﻩ , Masjed-e Shāh) is a mosque in Isfahan (Eşfahān), Iran. It is on the south side of Naghsh-i Jahan Square. It has been renamed to Imam Mosque after the Islamic Revolution.

Built during the Safavids period, it is an excellent example of the Islamic architecture of Iran. Many people see it as the masterpiece of Persian Architecture. The Imam Mosque of Esfahan is one of the everlasting masterpieces of architecture in Iran and all over the world. It is registered along with the Naghsh-i Jahan Square as a UNESCO World Heritage Site. Its construction began in 1611. Its splendor is mainly due to the beauty of its seven-color mosaic tiles and calligraphic inscriptions.

The port of the mosque measures 27 meters high. There are two minarets 42 meters tall on top of it. The Mosque it is surrounded with four iwans and arcades. All the walls are ornamented with seven-color mosaic tile. The most magnificent iwan of the mosque is the one facing the Qibla. It is 33 meters high. Behind it is a space which is roofed with the largest dome in the city at 52 meters height. The dome is double layered.

The acoustic properties and reflections at the central point under the dome is an amusing interest for many visitors. There are two seminaries at the southwest and southeast sections of the mosque. 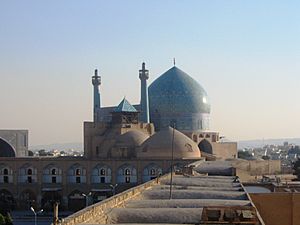 The architects of the mosque are reported to be the following masters:

The mosque is one of the treasures featured on Around the World in 80 Treasures presented by the architecture historian Dan Cruickshank.

All content from Kiddle encyclopedia articles (including the article images and facts) can be freely used under Attribution-ShareAlike license, unless stated otherwise. Cite this article:
Shah Mosque Facts for Kids. Kiddle Encyclopedia.